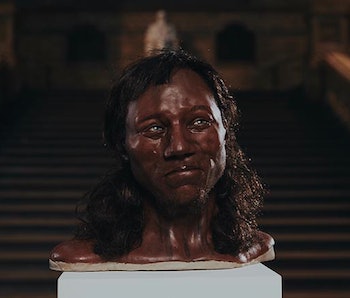 Cheddar Man, the name given to the oldest and most complete Homo sapien skeleton ever found in England, was a fairly typical Briton for his time. Found in Gough’s Cave in Somerset’s limestone Cheddar Gorge in 1903, he lived 10,000 years ago and died in his twenties, was 5 feet 4 inches tall and, like most Europeans in that era, lactose intolerant. But what scientists haven’t been sure about until now was how he looked: Was he as white as the history of Great Britain?

While previous reconstructions have portrayed Cheddar Man as a pudgy white guy, the results of a recent DNA analysis, published Wednesday by researchers at London’s Natural History Museum, reveals a very different portrait: a dark-skinned man with blue eyes whose genetic markers link him to sub-Saharan Africa.

The updated model of his face, released alongside the study, is a preview to the Channel 4 documentary on ancient DNA that will be released on February 18.

Painting the Cheddar Man’s new portrait involved extracting his DNA by drilling into his skull to retrieve a few milligrams of bone powder, then using a technique called next-generation shotgun sequencing — which involves breaking up DNA sequences into small pieces and then reassembling the sequences by matching what regions overlap — to assemble his full genome. The researchers examined the genome for specific DNA markers linked to known physical traits while cross-referencing it with the genomes of modern people who live near Cheddar Gorge today.

What they found was that, although modern-day British people share about 10 percent of their DNA with the European population Cheddar Man was a part of, he didn’t look a thing like the stereotype of a white, native British person, except that he had light-colored eyes. The most likely explanation for how he ended up there is that his ancestors left Africa, moved into the Middle East, and then crossed the land bridge that connected Europe and Great Britain to land in Cheddar.

“Cheddar Man subverts people’s expectations of what kinds of genetic traits go together,” Tom Booth, Ph.D., a postdoctoral researcher who works at the museum, explained in a statement released Wednesday. “It seems that pale eyes entered Europe long before pale skin or blond hair, which didn’t come along until after the arrival of farming.”

This analysis of Cheddar Man adds to the growing understanding that the skin tones of Stone Age Europeans were much more diverse than previously thought. Booth explains that scientists incorrectly presumed that the populations of modern humans who entered Europe 45,000 years ago adapted quickly to favor pale skin, which would help them absorb UV light and avoid vitamin D deficiency in that significantly darker environment. Now, genetic analyses are revealing that both Neanderthals and ancient humans living in Europe had a variety of often-dark skin tones paired with light-colored eyes and dark hair.

As with all research disrupting what we think we know about race, this finding is already controversial, with some online commenters seeming unable to accept the fact that this early Briton wasn’t white.

But, as Booth explained, the point of studies like these is to clarify the often-unfounded notions we hold about race. He pointed out that “imaginary racial categories” are modern constructions that especially can’t be applied to ancient people.