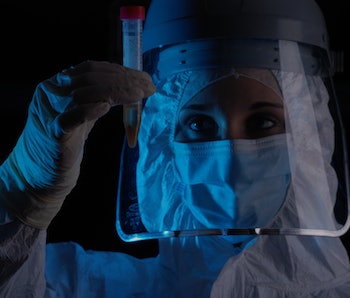 The Fertile Crescent, a quarter-moon shaped region that stretches across the Persian Gulf down to northern Egypt, is known to be the birthplace of a little thing known as farming. Archaeologists have found evidence for cultivating plants and herding animals in this region dating to 12,000 years ago. This was the part of the world where people first became sedentary, able to stick to one place because of cultivated grain and domesticated animals. But the mystery of this revolutionary time has hinged on one major question: Who exactly were these first farmers?

An international research team of palaeogeneticists argue in a paper published in Science on Monday that at least two highly divergent groups of people were the world’s first farmers: the Zagros people who lived in the eastern part of the Fertile Crescent and are ancestral to modern South Asians, and the Aegeans who 8,000 years later colonized Europe. This theory, supported by analysis of ancient DNA, proves that the origin of farming was genetically much more complex than previously believed.

“It is interesting that people who are genetically so different, who almost certainly looked different and spoke different languages adopted the agricultural lifestyle almost simultaneously in different parts of Anatolia and the Near East,” senior author Joachim Burger said in a press release. “The group of prehistoric inhabitants of the Zagros region separated more than 50,000 years ago from other people of Eurasia and were among the first who invented farming.”

These results, which co-author Farnaz Broushaki described as “a surprise”, dispels the previous theory that there was an unbroken trail of ancestry from early farmers moving westward to Europe. While one group of farmers did continue to Europe, another genetically distinct group settled in what is now Iran. This group is a previously uncharacterized population; it’s unclear whether farming was invented by both groups or if it was an idea that spread rapidly between them.

The research team determined this by analyzing the genomes of Neolithic human remains found throughout the region. They then compared these genomes to those of modern day humans. Radiocarbon technology used by the researchers on the Neolithic human samples revealed the body’s chronological age and data, which proved that they were in fact, ancient farmers.

Neolithic humans changed the game with their diet rich with cultivated cereals and domestic fauna. So next time you take a bite out of your bougie $14 salad, know that it was made possible by at least two ancient groups of people who had never heard of massaged kale.

More like this
Science
6.21.2022 10:45 AM
Ancient stalagmites point to a massive drought that upturned 6th century Arabia
By Allison Parshall
Science
6.26.2022 11:00 PM
The powerhouse of the cell has a more complicated origin than we thought
By Viviane Callier and Knowable Magazine
Science
7.2.2022 12:00 PM
Why is my cat scratching furniture? The answer might surprise you
By Tara Yarlagadda
Related Tags
Share: