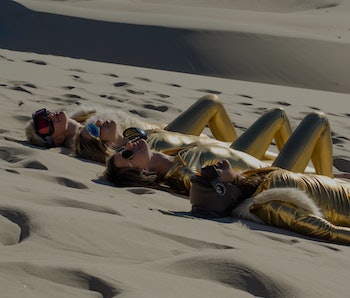 It’s summer, which for many pale-skinned folk thirsting for the carefree bronzed sheen of melanin-advantaged others means one thing: Time to lay under the burning hot sun and tan.

Tanning is, on a cellular level, a terrible idea — you’re essentially incinerating your DNA to shreds. Here’s how: Your cells are constantly duplicating their gigabytes upon gigabytes of data every few days, weeks, months, even years to help keep you alive and replenish the ones that have lived their term out. If your cells don’t duplicate, you die.

And you don’t make cell replication easy: Smoking, eating red meat, drinking booze, and more disrupt transcription and replication, making the next round of cells a bit less perfect than the first.

Which brings us back to the human tendency to toast in the sun’s DNA-scrambling rays: It’s definitively a bad idea, according to Sherrif Ibrahim, a dermatologist and skin cancer expert at the University of Rochester Medical Center.

Many of his patients, however, think a tan is healthy.

“People will tell me, ‘Oh, I go to the tanning booth and I get burned once and I’m good for the summer,’” Ibrahim said.

This is a bad idea, University of Rochester Medical Center dermatologist and skin cancer expert Sherrif Ibrahim said to Inverse. But many of his patients seem to think getting a tan is healthy.

That’s actually a dangerous myth about how tanning and safe sun exposure works, Ibrahim said. The fact is, there’s no such thing as safe tanning. Ibrahim explained why, and busted more common sun cancer myths along the way.

MYTH: Getting a ‘base tan’ early protects your skin for the rest of the summer.

FACT: Your skin won’t acquire — or maintain — a tan unless it detects actual damage already happening to its DNA.

It’s understandable that people assume a “base tan” is a good idea. Your skin really does darken because of melanin, a protective chemical that shields your DNA from the sun. But, Ibrahim said, your body doesn’t call for extra melanin unless DNA damage has already occurred.

“That is actually the initiating event of tanning in the skin,” Ibrahim said. “Tanning is the body’s physiological response to DNA mutation. Nobody tans unless their skin cells are detecting mutations to DNA. So in order to get a tan and in order to maintain a tan you have to sustain and register damage to DNA.”

MYTH: If you have dark skin already, tanning is no big deal.

FACT: Your skin tone is a bad metric for how protected you are.

If you’ve got more melanin in your baseline skin tone, you’re somewhat more protected against a first blast of ultraviolet radiating than someone with less melanin. “They have the melanin cap to begin with,” Ibrahim said, “so there’s more protection.”

But no skin type is immune to dangerous levels of DNA damage, and a dark baseline alone isn’t a good sign that you’re protected. The most protected people aren’t necessarily the people with the darkest baselines. Instead, they’re folks whose skin that responds fastest to sunlight. At the first hint of DNA damage, the melanin-producing cells in their skin go into overdrive, churning out protective pigment and pumping it into overdrive. If you tan much darker than your baseline with just brief sun exposure and never burn, your natural protections are more robust.

Regardless of skin tone, however, you’re never quite immune from damage; repeated, unprotected harsh sun exposure can be deadly and pays no heed to complexion. “If you’re dark skinned, your point of where there’s too much damage is a little bit higher, but there’s still that threshold of if you reach a certain amount you’ll still get skin cancer,” Ibrahim says.

MYTH: No tan, no vitamin D.

Tanning has become so associated with vitamin D that you can find articles by for-profit “health experts” implying that people who use sunscreen are actually unhealthy because they’re not getting enough sunlight.

It’s true that Vitamin D is a necessary nutrient, and that sunlight can help convert it into its active form. It even may (or may not) be true that a fair number of people are deficient. But that’s not because of sunscreen or skipping tans.

“You get enough UV incidentally on the back of your hands walking from your car to the supermarket and back for [converting Vitamin D] to happen.” Ibrahim said. “The people who are deficient in vitamin D for [lack of sunlight] are like nursing home patients who never go outside for months and months and months.”

And if you’re worried about your unprotected sun exposure for Vitamin D reasons, there are plenty of options besides tanning.

“If someone told you you got calcium from smoking I don’t thing you would go buy a carton of cigarettes,” Ibrahim said. “If you feel like you have insufficient levels, you go to the store and you buy a vitamin D pill. Or you drink milk or other foods that are fortified in vitamin D.”

MYTH: You should buy the highest-SPF sunscreen available.

Most people have likely heard of SPF, but they may not know what it means. Your sunscreen’s SPF is its “sun protection factor,” a measure of how it augments your skin’s natural protection against ultraviolet radiation. If a sunscreen has an SPF of 30, that means that, when it’s properly used, your skin will take 30 times longer to burn than it would otherwise. SPF of 50? That’s 50 times longer to burn.

But some companies have marketed sunscreens with ludicrously high SPFs, ranging well into the triple digits. “People get confused by this ‘SPF of 180.’ The FDA is cracking down on that,” Ibrahim said.

In reality, no sunscreen will last on your skin long enough to protect it from the sun that long. There’s a real difference between, say, 30 and 50, Ibrahim said. Beyond that, it’s all marketing.

MYTH: A sunburn is your skin literally burning.

When your skin “burns” in the sun, nothing has actually combusted. Burning is a bodily process just like tanning, and your skin’s last-ditch effort to protect itself from mutations building up in its cells.

“At some point [after getting tons of DNA damage] the cells are like, ‘We’re done, we’re going to kill ourselves. There’s so much damage, we can’t fix it,’” Ibrahim said. “And that’s what’s called apoptosis. Suicide.”

Cells in your skin initiate mass die-off, trying to keep any of the mutations they’ve incurred from surviving in your body. But it’s an inefficient process, and those mutations can, and often will, live on.

MYTH: Just a smidge of sunscreen will protect you.

FACT: Uh, more like a golfball of the stuff.

When researchers standardized the SPF scale, it was for a concentration of 2 grams of sunscreen per square centimeter of skin.

“What that translates into is … a golfball size or a shotglass size full of sunscreen to cover your face, and what’s not covered by shorts and a t-shirt. So your lower legs and then your forearms,” Ibrahim said.

Most of his patients don’t actually do that. That’s a problem. “If you put an spf of 30 suncreen on at not enough concentration, you’re effective protection is one-tenth of that, so an SPF of 3.”

How do you know you’ve put on enough? “You want to be outside and not have your skin change color at all. No redness, no brownness. And that’s when you’re adequately protected,” Ibrahim said.

MYTH: A t-shirt should do the job.

“If you can hold a piece of clothing up to a light and see light pass through it, then UV is passing through it,” Ibrahim said.

But people assume if an area is covered by even a thin shirt, they don’t have to apply sunscreen there. “We see a lot of these skin cancers on the shoulders or on the back, particularly of men,” Ibrahim said. “It’s generally accepted that a t-shirt gives you an SPF of about three.”

FACT: The only label that matters is “broad spectrum.”

Asked if he had a favorite sunscreen, Ibrahim declined to answer, saying the differences between brands aren’t that important for your health.

Ibrahim said the differences are purely cosmetic, adding: “There are sunscreens that range from five bucks to a hundred bucks. The ones that are more expensive don’t work better, they’ve got the same active ingredients for blocking the UV light. The more expensive stuff will just rub in better, seem less oily.”

The only label that does matter is “broad spectrum.” That means it blocks the full range of UV light. Get that kind of sunscreen, apply it thick enough to work, and reapply every few hours in the sun (or after a run or dip in the pool), and you should be set.

More like this
Science
5.7.2022 7:00 PM
The grossest idea from The Matrix could lower your energy bill
By Amin Al-Habaibeh and The Conversation
Science
5.13.2022 3:01 PM
Can restaurant menus help diners choose climate-friendly meals?
By Tara Yarlagadda
Science
5.18.2022 8:00 PM
Pollution is responsible for one in six deaths each year — and it’s getting worse
By Tara Yarlagadda
Related Tags
Share: