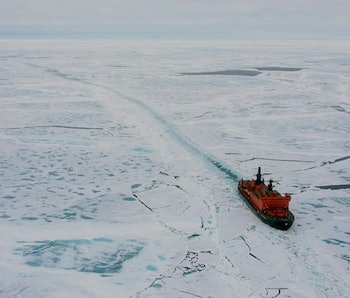 On Friday, China released its first strategy paper outlining its ambitions for the Arctic.

In the paper, it declares itself a “Near-Arctic State” with commercial and research interests in the globe’s far north. China has long been interested in the Arctic for shipping routes; natural resources, including oil, gas, minerals, and fisheries; as well as scientific exploration.

But even as the paper outlined the Arctic as a “Polar Silk Road,” it also aimed to alleviate some concerns about the extent of its ambitions, pledging support for international standards and cooperation and balancing economic interest with environmental protection.

This is not China’s first expression of interest in the Arctic, though it may be the clearest and strongest indication.

After years of lobbying, China gained observer status on the Arctic Council in 2013, an intergovernmental coordination organization made up of the eight countries with Arctic territory — U.S., Russia, Canada, Denmark, Finland, Iceland, Norway and Sweden — once focused primarily on research but has become increasingly political.

Last year, China’s icebreaking ship, the Snow Dragon, circled the Arctic Rim for the first time and, at the end of the year, it had invested $27 billion dollar investment in a liquefied natural gas project on Russia’s Yamal peninsula.

For centuries, the Arctic has been an area of fascination. Since the late 1500s, explorers have been searching for the fabled Northwest Passage, a sea shipping route through the ice. Hundreds of men have died in the quest, and it wasn’t until the early 20th century that it was first crossed. The honor went to Norwegian Roald Amundsen — though it took him three years and three freezing winters in the ice to pass.

Since then, there have been 254 more passages, according to data from the Scott Polar Research Institute at the University of Cambridge, with that number increasing sharply in recent years. Last year saw a new milestone; for the first time, a Russian ship sailed from Norway to South Korea through the Northern Sea Route without an icebreaker as escort..

This is an undeniable result of climate change, which is thawing the permafrost at record numbers. This ice melt is resulting in a global scramble for the Arctic’s natural resources — including oil, iron ore, natural gas, coal, uranium, and diamonds — that is only heating up.

There are potentially hundreds of billions of dollars at stake. According to the U.S. Geological Survey, up to 30 per cent of the world’s undiscovered gas and 13 per cent of oil is undiscovered within the Arctic Circle.

That China is interested in the Arctic, then, is no surprise. The Arctic is one of the world’s last unexplored regions, and China’s interest is matched by the 12 other states that have observer status on the Arctic Council, as well as a plethora of other actors, from tourism companies to rich yachters. The difference, however, might be that, more than the others, China has the economic might to act on that interest.

China’s naked arctic ambitions must be understood in the context of its wider economic ambitions; it is the latest expansion of Chinese President Xi Jinping’s Belt and Road initiative.

First announced in 2013, Belt and Road is an infrastructure investment project that would boost trade on the route of the ancient silk road as well as along the sea route that connects China to Southeast Asia and East Africa. Or, at least, that was the original plan, though with every passing year, it seems to grow larger in scope.

And now, apparently, the modern Silk Road’s reach is growing even longer still… to even the Arctic.

If you liked this article, check out this video where Bill Nye predicts the future!

More like this
Gaming
23 hours ago
6 years later, the biggest sci-fi game ever has finally reached its full potential
By Joseph Yaden
Mind and Body
22 hours ago
What scientists know — and don’t know — about the Langya virus
By Miriam Fauzia
Entertainment
22 hours ago
34 years ago, 'Batman' redefined death in comics
By Chrishaun Baker
Related Tags
Share: