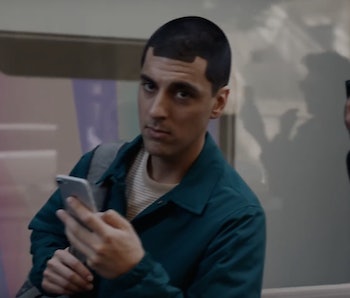 Samsung has gone on the warpath against Apple. The Galaxy Note 8 maker has criticized the iPhone X in a not-so-subtle ad released Sunday, which shows users frustrated with iOS’ limitation over the years. The new ad takes a jab at the shape of the phone’s screen, which features a notch at the top to house the face recognition system.

The $999 iPhone X, which launched last Friday to much fanfare, brings a number of improvements to the smartphone line like an OLED screen, a face recognition system, and longer battery life. But some features, like a screen that extends to the edges, have been present on Samsung devices for many years.

The ad starts with a look at the lines for the iPhone in 2007, before switching to a 2010 scene where the main character tries to take a picture with their phone, only to find out they don’t have enough storage. Samsung has long touted its support for expandable storage in the form of memory cards.

The scene then moves through the years, as the character sees a Samsung Galaxy Note user taking down notes with the included stylus and dropping their phone in water only to use it without issue. The user is then seen struggling with the 3.5mm headphone jack adaptor included with last year’s iPhone 7. The ad ends with the character, now an owner of a Samsung Galaxy, walking past people waiting in line for the iPhone X.

Watch the commercial below:

Like so many iPhone launches before, last Friday’s release drew lines rarely seen for Samsung phones. Fans stood outside in the November chill for days, waiting to be among the first to own Apple’s new phone. One retailer described the limited number of phones available as a “catastrophe.”

Of course, Samsung isn’t entirely opposed to the iPhone X. While Apple designed the OLED screen in the new device, the company is employing Samsung to manufacture the display.

More like this
Innovation
8.9.2022 11:00 AM
This self-healing material could fix your dinged-up car in 30 minutes
By Molly Glick
Innovation
8.14.2022 10:00 PM
60 years ago, an iconoclast designer revealed a fix for our biggest tech problem
By Tim Gorichanaz and The Conversation
Innovation
17 hours ago
Scientists finally found an efficient way to recycle plastic foam — it could make them rich
By Joanna Thompson
Related Tags
Share: