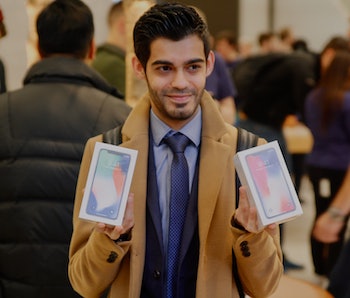 The iPhone X is here. At 8 a.m. local time around the world on Friday, Apple fans camped out to be among the first to get their hands on the company’s latest smartphone. Buyers told Inverse that the face scanner, OLED screen, and wireless charging features as some of the reasons they were willing to spend over $1,000 at the crack of dawn.

Outside the Regent Street store in London, fans stood waiting in the 40-degree chill. Second in line was Marco Pierre White Jr., a 22-year-old model and former Big Brother contestant. White, who planned to get a 256GB model in silver, already had another one pre-ordered. If successful, he planned to cancel his order, which was due to arrive in 10 days time.

“It’s different to anything else out there on the market, and it’s a fashion statement, because not everyone has one,” White told Inverse. “It’s part of the whole look.”

White had been outside the store for two days solid, with his girlfriend bringing him food.

It wasn’t the only city with people waiting outside to buy. In Tokyo, press photographers at the Omotesando store snapped buyers as they got to grips with the new device for the first time.

In New York, at the Soho store, buyers were slightly more fortunate than their London counterparts as they waited outside in a 60 degree heat:

Just north of the Soho store, a crowd was gathering at the Fifth Avenue store next to Central Park:

The first customer in the London line was Adam Rabi, a 23-year-old graduate, who had been in line for three nights. Like White, he had a 256GB white model on preorder too, but Rabi’s plan was to sell the 256GB space grey he bought from the store and use the money to fund the cost of the first phone.

“I had a tent, I had a sleeping bag,” he said. “To eat, just left my tent or seat, two minutes walk, quickly, ran back.”

Although he liked the look of the face recognition and wireless charging, he readily admitted that the Samsung Galaxy Note 8, which launched earlier this year, has both of those features.

The line, divided up into sections as it snaked round the back of the store, contained a variety of people, all braving the cold for different reasons. Chloe Hartley, a 20-year-old event management student, planned to buy the 64GB model in silver to replace her iPhone 6S. She cited the 5.8-inch OLED screen as her reason for waiting. It’s the first time since the iPhone 6 launched in 2014 that Apple has changed the design, ditching the iconic home button.

“The whole thing is a screen, and I really like that!” Hartley said. “The 6S, 7, 8 have so many similarities, and the X is completely different.”

Kington Kong, a 48-year-old lawyer, had already pre-ordered four iPhone Xs to give as gifts, and planned to get “as many as they allow me to buy” at the store. For him, it was all about the Face ID, the face recognition software that unlocks the phone in a matter of milliseconds. However, he felt Android had the upper hand by offering dual SIM card support on some devices.

“We travel a lot, so rather than switching SIMs we can use both,” Kong said. “I think Apple should consider that.”

Not everyone was as dedicated. Tom Wagner, a 33-year-old project leader for the Swiss Post, decided to join the line that morning on a spur of the moment after watching a recording of the unveiling from September.

“Problem is, if you ever had an iPhone you can’t change,” Wagner said.

He’d never lined up for a phone launch before, and doubted he’d ever do it again.

Wagner wasn’t the only person that wasn’t taken in by the pre-launch hype. Although Apple’s chief designer Jony Ive has referred to the phone as the start of “a new chapter” in the company’s history, bemused commuters peered round the corner to see what all the fuss was about.

“What are they queueing up for?” one passerby asked. When told it was for the iPhone X, he tutted and continued walking.

Inside the London store, employees practiced cheering before the doors opened at 8 a.m.

Just like he hoped, White was among the first to get his hands on the iPhone X:

White clutched the phone in his mouth, grinning as he posed with the device he’d waited outdoors days to get his hands on.