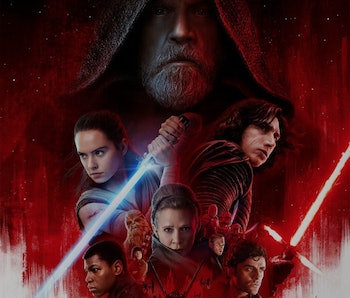 Set aside your theories about Rey or Luke turning evil, because the latest theories about Star Wars: The Last Jedi worry that ace pilot Poe Dameron might be corrupted towards the Dark side.

An official Japanese translation of Poe’s character description in The Last Jedi says that both sides of the war efforts are growing afraid of Poe for his “dedication.” Fear, as we all know, is the path to the Dark side. Here’s what the translated text says:

The English version of this description, as revealed at San Diego Comic-Con over the summer, said, “Ever brash and foolhardy, his hot shot antics wear the patience of both First Order and Resistance command.” Whether or not Poe’s turning evil, he’s at the very least annoying even his closest allies in The Last Jedi.

Though it was overshadowed by other epic scenes and shocking twists in the latest film trailer, Poe does offer some violent words:

“We are the spark that’ll light the fire that’ll burn the First Order down.”

Inspiring, sure, but also pretty terrifying, especially considering how haggard he looks. Check it out starting around 1:34:

Nobody used that kind of strong language in the Rebellion of the original trilogy, so maybe Resistance fighters have every reason to be afraid of Poe.

These concerns about Poe’s growing darkness could shed light on a scene we heard about back in April between Poe and Carrie Fisher’s General Leia Organa. Oscar Isaac, who plays Poe, called the scene “pretty intense” and said they had to shoot it dozens of times. He confirmed a month later that Leia actually slaps Poe in the scene.

Could the slap come right after he says he wants to “burn the First Order down”? Maybe, but we can safely assume that even Leia will be worried about how reckless Poe becomes in The Last Jedi. Should Poe even succumb to fear, there’s almost zero chance he’d ever turn into a Sith or Knight of Ren or anything like that; The Force Awakens made it very clear that Poe was powerless to resist Kylo Ren’s mind invasion, so Poe’s the furthest thing from Force Sensitive.

Some desperate fans looking for further validation of this “Dark side Poe” theory like to point out that Poe is literally on the “Dark side” of the latest poster for the movie. Whereas all of the good guys are on the left, Poe is on the right with baddies like Phasma, General Hux, and Kylo Ren. Leia and Luke are right in the middle.

Chances are that whoever designed this poster was just looking for visual symmetry. Poe needs prominent placement as one of the higher-billed actors, so it wouldn’t make sense to make the poster itself lopsided.

There could be any number of explanations for the placement. Poe becoming a Sith is hardly the most likely.

If you liked this article, check out this video about two huge twists revealed in the Last Jedi trailer.