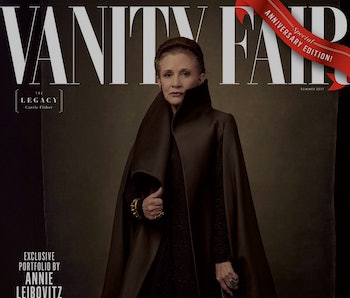 The new, extensive Vanity Fair cover story is full of great details about what’s going to go down in Star Wars: The Last Jedi, but perhaps the best anecdotes to come from the piece were stories of just how great the late Carrie Fisher was.

In the article — which also features some truly moving portraits of Fisher and her on-screen sibling, Mark Hamill’s Luke Skywalker, and her real-life daughter Billie Lourd — Fisher’s co-stars gushed about her, saying she was the one who “taught them how to deal.”

“Carrie lived her life the way she wanted to, never apologizing for anything, which is something I’m still learning,” Rey actress Daisy Ridley said. Since Rey’s role is the most similar to Fisher’s in the original trilogy, the late actress was an invaluable role model for the 25-year-old Ridley.

But, she served an awesome beacon to other cast members, too, exuding a DGAF attitude while also clearly caring about the people she was working with. John Boyega, who plays Finn, recounted a great story to Vanity Fair:

Boyega recalled that when there was a backlash against his appearance in the first Force Awakens teaser trailer, released in November 2014—the sight of a black man in stormtrooper armor drew ire from racists and doctrinaire Star Wars traditionalists—Fisher counseled him not to take it to heart. “I remember—and forgive me, I’m going to drop the f-bomb, but that’s just Carrie—she said, ‘Ah, boohoo, who fuckin’ cares? You just do you,’” he said. “Words like that give you strength. I bore witness in a million ways to her sharing her wisdom with Daisy too.”

Oscar Isaac, the actor behind the ace pilot Poe Dameron, is a little older than Ridley or Boyega at 38 years old, but he too recalled Fisher being a great presence on the set. In previous interviews, Isaac recalled shooting an “intense scene” with Fisher, but he revealed to Vanity Fair that it involved getting slapped. A lot.

“We did this scene where Carrie has to slap me. I think we did 27 takes in all, and Carrie leaned into it every time, man,” Isaac told Vanity Fair. “She loved hitting me.”

Especially knowing that Fisher was originally going to be the star of Episode IX, it’s a real bummer that she’s no longer with us.

Star Wars: The Last Jedi is set for a December 15 release date.