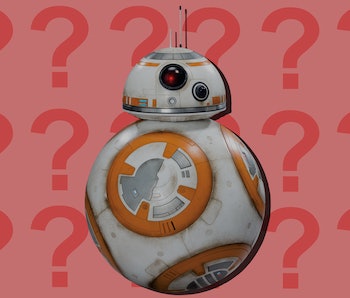 It’s best not to think too hard about the “lives” droids lead in the Star Wars universe. Droids like C-3PO are beloved friends, but they’re also built to serve their masters, and they can (and do) have their minds wiped at whim. So, knowing that there’s apparently droid romance in that far, far away Galaxy doesn’t make droid personhood any clearer. But, hey, good for BB-8, who apparently has a love interest according to a new, official Star Wars comic.

In Star Wars: Poe Dameron #20, which follows the exploits of the Resistance’s ace pilot before the events of The Force Awakens, Poe discoveries that somebody has spruced up his X-Wing. A droid, who Poe identifies as IVEE, rolls up and reveals that it did the good deed — bot not for Poe’s sake. IVEE fixed up the ship to keep BB-8 safe. The two droids roll off as Poe mutters “good for you pal,” seemingly approving of BB-8’s, uh, relationship.

The writer behind the series, Charles Soule, appeared to confirm that there’s something going on between BB-8 and IVEE.

Clearly, droids can from relationships — look no further than C-3PO and R2D2, the galaxy’s original odd couple. That relationship doesn’t appear to be overtly romantic, IVEE and BB-8’s relationship is presented as something more than friendship, in the brief glance we get at it.

And, if it’s romantic, is it sexual? Do droids fuck? Star Wars hasn’t really addressed the question of droid sex (either with other droids or with biological beings), and given that the franchise is owned by Disney, it probably won’t. There was that time that Rogue One director Gareth Edwards “confirmed” that R2-D2 and C-3PO have sex, and that R2 has “that little thing that comes out,” but he was joking, we think. BB-8 and IVEE probably aren’t rolling off to go make sparks fly, literally, but we don’t know for sure that they aren’t. Which means that now you need to imagine the logistics for a second.

Anyway, is it wrong to even say BB-8 has a girlfriend in the first place? Do droids have genders? Wookiepedia states that droids lack biological sex, but they’re coded as “male” or “female” to appear more lifelike and for convenience. BB-8 appears to be coded as “male,” and ComicBook notes that male actors Ben Schwartz and Bill Hader provided the basis of BB-8’s voice, further making it seem like Beebee’s a he.

IVEE sounds like a girl’s name, Ivy, but that doesn’t necessarily mean that the droid is or is not coded as a female. That brings up another point, though: Why is IVEE’s name IVEE? She (or perhaps it) is an R2 unit. Is R2-IV even a possible name for an R2 unit, or has Star Wars just thrown up its hands for good when it comes to droid naming conventions?

Also, where’s this relationship going to go? IVEE wasn’t in The Force Awakens, and the droid hasn’t appeared in Last Jedi trailers. Are they going to break up? Is IVEE going to die? Is BB-8 — adorable, delightful BB-8 — actually a tragic widower?

All of this is giving me a headache, but no matter what weird stuff BB-8 and IVEE get into, it still won’t be Star Wars’s most fraught relationship. That would either be when 9-year-old Anakin Skywalker had the hots for 14-year-old Padme, or Luke and Leia’s light twincest.

If you liked this article, check out this video on why C-3PO was the unsung hero of Star Wars.