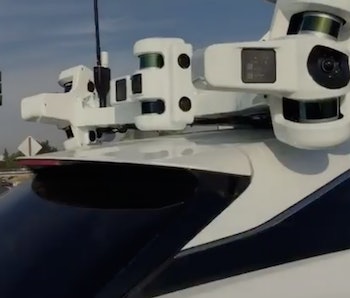 Apple’s autonomous car project appears to be coming to life. “Project Titan,” the reported codename for the company’s venture into driverless vehicles, has gone through a number of supposed forms, from a full-fledged car to a piece of software designed to drive a car.

The co-founder of autonomous taxi company Voyage, MacAllister Higgins, shared Wednesday what he claimed to be Apple’s “Project Titan”: a giant array of cameras and sensors popped on top of a car.

There’s a lot of technology into this roof-mounted unit, which used a Lexus sports utility vehicle as its test bed. It’s got 12 Lidar sensors, six on the front and six on the back, which are used by autonomous cars to judge how far away objects are by firing lasers and timing how long it takes to come back. Beyond that, the roof contains radar technology and what MacAllister said is “likely” the majority of the computing hardware.

Look at the vehicle in action here:

Another Twitter user, idiggapple, also claims to have seen the vehicle pull up to an Apple shuttle stop:

“Project Titan” has gone through a turbulent development process to get to this stage. Last October, it was announced that the project had shed hundreds of employees, as it ditched its original idea to develop a full self-driving car from scratch. The new approach favored working with existing car manufacturers to give their vehicles autonomous capabilities.

Tim Cook, Apple’s CEO, has gradually begun talking about Titan in the press. In August, he said in an interview that Apple had a “large [autonomous systems] project going,” and it was making a “big investment” in such a project.

“From our point of view, autonomy is the mother of all A.I. projects, and the autonomous systems can be used in a variety of ways, and a vehicle is only one,” Cook said.

The project’s giant head unit could enable easy switching from vehicle to vehicle, allowing Apple to test a variety of setups. Although it looks goofy at this stage, it appears the company has an interest in bringing its project to life, potentially positioning itself as a key player in the fledgling driverless marketplace.

Not everyone is on board with the idea of lidar, though. Elon Musk, the CEO that’s trying to bring autonomous driving to his Tesla lineup of electric cars, has opted for ultrasonic sensors instead. Jianxiong Xiao, founder of the autonomous car company AutoX, also thinks that the sensors suffer from low lifespan.

If you liked this article, check out this video on five reasons to get excited about self-driving cars.