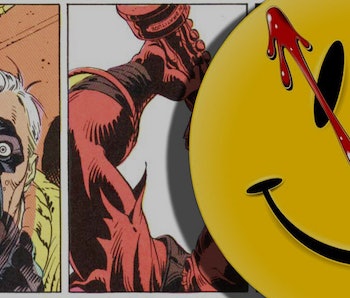 Watchmen, the seminal graphic novel that changed comics forever, is being adapted into a television show — for real this time. Showrunner Damon Lindelof has shared a photo to mark the first day of work on the HBO series, and based on the very specific prop he elected to share, it doesn’t seem like the show is going to shy away from some of the comic’s most brutal moments.

On Tuesday, Lindelof, who is best known for the cerebral, acclaimed shows Lost and The Leftovers, posted a photo on Instagram with the caption “Day One,” though, since few details about the show have been released, it’s unclear exactly what stage of production he’s referring to. The background is nothing special, just an empty writers’ room, but in the foreground, there’s a base of a statue. Two booted, bronze feet stand upon a pedestal with a plaque bearing the phrase, “In Gratitude.” It’s a prop that fans of Alan Moore’s comic should recognize, as it’s a statue that was awarded to the original Nite Owl, Hollis Mason, upon his retirement as a crime fighter.

The same statue was also used to bludgeon the old man to death during a robbery/home-invasion robbery gone wrong.

Watchmen is one of the best-selling, most famous, and most influential comic series ever released, for better or worse. It’s no surprise that Lindelof is familiar with the source material he’s adapting. But, that he would choose to mark the start of production with this prop rather than something more iconic (the blood-stained smiley button, for instance), is interesting.

The statue might be an actual prop from the show, or it might be a mere writers’ room decoration, but the scene it hails from, Hollis’ murder, is one of the most brutal parts of an especially brutal comic. Hollis was one of the original heroes. He fought crime because it was the right thing to do, and he survived long enough to retire with honor. He mentored the second Nite Owl and was working on books about his exploits. He was beloved. And then some punks murdered him with a statue that celebrated all the good Hollis had done in his career. It’s about as ironic and ignoble an end as you can imagine, which means it’s pretty indicative of Watchmen as a whole.

Fans of The Leftovers are especially aware that Lindelof knows how to just devastate your emotions, so if he’s starting off Watchmen with a nod to one of the hardest-hitting scenes, fans are in for a ride.

There’s no release date for Watchmen yet, but Lindelof’s Instagram seems to suggest that, yes, the series is actually happening. There have been teases of a Watchmen TV series since 2015, at least, coming a few years after Zack Snyder’s film adaptation of the nigh-unadaptable source material, which opened to mixed reviews. Stay tuned for more news.

If you liked this article, check out this video that reveals another reason for Bruce Wayne becoming Batman.

More like this
Entertainment
8.4.2022 7:00 AM
The Sandman release date, time, plot, cast, and trailer for Netflix's dark fantasy series
By Jeff Spry
Entertainment
8.14.2022 1:30 PM
Why the Andor trailer could be setting up a Darth Vader fight scene
By Dais Johnston
Entertainment
8.2.2022 12:30 PM
How Scott Snyder is blazing a new path in comics after 'Batman'
By Eric Francisco
Share: