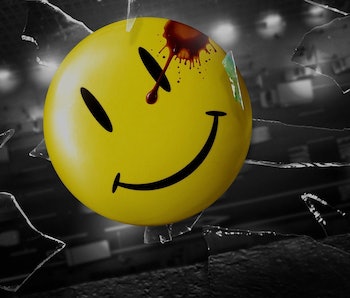 The iconic symbol that’s emblematic of the Watchmen series — one that even invaded the DC comics universe — was actually a throwaway costume detail created by illustrator Dave Gibbons to contrast a character’s grim costume. Little did he know that the smiley badge would go on to be the de facto logo for Watchmen itself and an important them throughout the book.

Details of the symbol’s creation come via an Entertainment Weekly interview with Gibbons, in which the artist reveals untold details about the creation of the comic.

In Watchman’s 12-issue run, heroes — both super and otherwise — are a reality, and when one of their own winds up murdered, several retired masked crusaders regroup to solve the mystery of their former comrade’s death. The costume of that dead hero, the Comedian, had everything to do with the genesis of the blood-stained smiley.

“The character of the Comedian was supposed to be a government agent who worked undercover in foreign countries to stabilize them,” Gibbons explained.

The concept they settled on was closer to a “toughened-up version of Groucho Marx” with an outfit that was “very functional with lots of ammunition belts and straps and pouches and things like that.” The one thing missing was something to lighten up the aesthetic.

“I drew a tiny little yellow smiley faced badge, almost as a throwaway,” Gibbons said, “because I thought that’s a really interesting contrast. This big hulking dark character, with this little splash of bright, silly color.”

But he had no idea how firmly Moore would latch onto that badge.

The story of Watchmen opens on the Comedian’s death, and Moore was so taken with the symbol that he opened the entire series with that image: Moore thought, “How about the Comedian’s been thrown out the window [and] the first thing we see is just that badge with some blood on it? And then we pull back and see more?”

The Comedian’s costume came to accurately convey his role as star-spangled madman that laughs at the irony of it all: the world itself is a joke. His badge reflects the collision of his nihilism and cynicism. “I’ve always liked that idea of taking disparate or discordant elements and combining them into a symbol that somehow does say something thematically about the story that it’s in.”

What Moore and Gibbons also love about the symbol tainted with a splash of blood is how well it embodies the themes already at play in Watchmen, that of a colorful, heroic world gone to shit.

“A black and yellow smiley face, with a splash of really realistic blood on it,” Gibbons said. “It was like the real world imposing itself on a cartoon, which is what we were trying to do by treating comic book characters as if they were living in a real world.”

That real world is a world where if your cape gets caught in a revolving door while trying to stop a bank robbery, you might just get shot to death for your trouble. “It’s all a fuckin’ joke,” the Comedian would say.

More like this
Entertainment
7 hours ago
Harley Quinn Season 3 could fix a major Batman controversy, trailer hints
By Eric Francisco
Entertainment
6.24.2022 11:15 AM
Behind the scenes at “Herogasm,” The Boys’ most NSFW episode ever
By Aaron Pruner and Jake Kleinman
Entertainment
6.27.2022 1:30 PM
17 years ago, DC copied Marvel — and told the worst Batman story ever
By Richard Newby
Related Tags
Share: