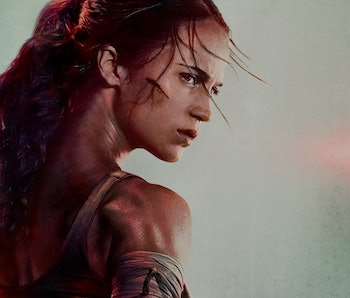 Lara Croft can do some incredible things, like wield two guns like a boss and shoot arrows from a self-forged bow, but the abilities of the fictional adventuress are generally still restricted by the rules of human anatomy. Yet, the first poster released for the upcoming Tomb Raider reboot shows actress Alicia Vikander in a decidedly anatomy-defying position, with her neck turned to an impossible degree. It’s difficult to say what exactly is going on here, but one thing is for certain: Human necks can’t move that way.

The neck’s range of motion is strictly defined. It can flex upward up to an angle of 50 degrees, downward to 50 degrees, and side to side by 45 degrees. If a person rotates their head while pushing on a shoulder to get a maximum turn, the neck can turn about 80 degrees to the left or to the right.

In this poster, it looks like Croft’s elongated neck hasn’t really turned at all — and yet, somehow, her head is at a severe rotated angle.

In real life, the movement of the human head is limited by the neck and its 13 major muscles, which control the rotation of each joint on the cervical spine. The neck, at the uppermost part of the cervical spine, is covered by nerves, muscles, ligaments, tendons, and blood vessels, and is the reason your heavy head can move around. The weight of the head on the spine, in turn, is dependent on the degree that the head is turned. If it’s bent at, say, 15 degrees, the weight on the spine is about 27 pounds; at a looking-down-at-your-phone-and-texting angle of 45 degrees, however, the weight on the spine is much heavier, at 49 pounds.

In the poster, the degree that Croft’s head moves in relation to her neck suggests she’s more like an owl than a human. Owls can swivel their heads up to 270 degrees thanks to several major biological adaptions that allow them to rotate that much without injuring themselves.

In a 2013 study published in Science, Johns Hopkins University researchers explained that owls have 14 cervical vertebrae while humans have seven, and more importantly the location of their carotid arteries — crucial for supplying blood to the scalp, face, neck, and brain — allows them to twist further than humans can. Humans have carotid arteries on the sides of the neck; owls have them at the center in front of their spine.

Relatedly, to protect the vertebral arteries, which bring blood to the upper spinal column and brain, humans have bone canals in their neck that fit snugly around the vessels. The bone canals of owls, meanwhile, are 10 times bigger and filled with an air sac. This extra space, explains the John Hopkins team, helps reduce the risk of damaging the vessels when owls twist their necks all the way around.

“Brain imaging specialists like me who deal with human injuries caused by trauma to arteries in the head and neck have always been puzzled as to why rapid, twisting head movements did not leave thousands of owls lying dead on the forest floor from stroke,” senior study author Dr. Philippe Gailloud said in a statement. “The carotid and vertebral arteries in the neck of most animals — including owls and humans — are very fragile and highly susceptible to even minor tears of the vessel lining.”

Lara Croft, as least the Croft we see in this poster, is apparently not susceptible to the minor tears of vessel lining — which is great if Warner Brothers wants her to be a superhero, and terrible if she’s supposed to be a human being.