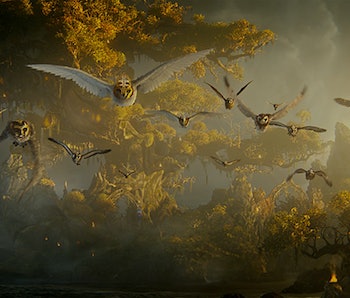 Many have no doubt forgotten 2010’s owl-centric action-adventure epic Legends of the Guardians: The Owls of Ga’hoole; five long years later, it is a cultural footnote. I’m not sure why. A film that is AOATT (All Owls All the Time) and incorporates a word as unlikely as “Ga’hoole” into the title should, by rights, have become an instant after-school-program classic by now. Somehow, this has not come to pass. Ga’hoole even escaped 2010 as only the fourth highest grossing animated feature.

How? The preview immediately distinguished it from the crowd of computer-animated children’s films with their cars or robots or Minions. This warrior-owl tale was something new. I could imagine myself as a pre-teenage child, gaping at and thirsting after it – waiting in line on opening night. Never outside of nature film (and probably even within it) had the world seen this many owls in so much daredevil action. If that isn’t innovation, than what is?

Another fascinating element of the upcoming film was that it was not coming courtesy of, say, the producer of Madagascar: Escape 2 Africa or How to Train a Dragon, but from… the director of 300, The Watchmen and the forthcoming Batman V. Superman. This salient information felt like it had been snuck into the preview; no doubt the studio was unsure whether it would be a draw or a recipe for disaster. There was no way for parents to know: Would these 3D-animated, well-preened owls fight to the bloody death and eat each other’s entrails, while beating bits of owl spleen and refuse off of their feathered breasts? Or was the film going to be phoned-in garbage – Snyder, somehow down on his luck like M. Night Shyamalan, throwing anything at the wall that might make a buck?

But the circumstances were quite the opposite. Snyder, you might be surprised to learn, is a staunch family man, whose children (currently, the man has six!) loved Kathryn Lasky’s Guardians of Ga’hoole book series. The film was, in fact, Snyder’s pet project – an adaptation of Lasky’s first three Guardians novels — one which he could take on because his previous films had topped the box office. The film’s back story does recall M. Night, in some sense: The noted horror director’s worst and most tedious film, Lady in the Water, was also a passion project, inspired by a bedtime story he made up to tell his children (he also published a book). This is evident in the movie; like most improvised stories you tell your kids, it’s not very well thought out, and in the soporific sense, it functions very well.

With Ga’hoole, Snyder suddenly became a director with human feelings and emotions – so much more than simply the Dane Cook of the multiplex action film. That’s not to say that Ga’hoole isn’t chock full of textbook Snyder stylistic gambits. It is violent, erring on the more daring end of PG due to blood dropping from plumage, scary war-helmeted owls and fascistic overtones. Most importantly, however, the film is heavy on speed-ramping and slow motion — Snyder’s only unimpeachable trademarks. These owls zoom forward to dig their talons into their foe, almost get there, and then back up and do it again. Unlike all the hyper-macho, hyper-gory extended-cut-scene action in 300, it’s a joy to see these owls in instant replay mode.

Snyder’s film also hits on all tropes that make a good young-adult-directed fantasy movie. Soren, the strapping young owl who believes the legends about the virtuous legion of the Guardians of Ga’hoole (remember, from the title?) is the Luke Skywalker/Harry Potter stand-in, an eager student and golden heart who’s not afraid to break the rules in the service of good. There is also a Dark Side, represented by the “Pure Ones,” the enemies of the Guardians — into whose clutches Soren’s surly and less popular brother, Kludd, falls. The eccentric, twitchy aging Guardian-cum-owl-historian Lyze of Kiel (alias: Ezylryb, if you can even believe it) is equal parts Obi-Wan and Yoda — certainly Yoda-esque in stature. The atmosphere of cute animals fighting clans of each other and traversing distances on quests ties in directly in appeal to Brian Jacques’ legendary Redwall book series. For Disney fans — and the younger sibling who doesn’t understand the plot — there’s a goofy Rafiki-esque anteater. Ga’hoole is a perfect and fail-safe collage of influences and archetypes: not original, but nonetheless charming.

Most of the movie’s appeal though, is that you are staring into big, twinkling-eyed owl faces the whole time and not, say, standard-issue zombies, over-saturated images of racist Persian stereotypes or other characters that looked better in their respective comic books. With Ga’hoole, Snyder provided the best owl material seen in cinema since Archemides bumbling around in The Sword in the Stone, and this film has at least five owls working on that level. You’ve got owls for any mood and occasion. By making the one definitive owl adventure film, Snyder made his only truly positive contribution to cinema to date. If this finds its way into streaming-service syndication, I have faith that, in time, Ga’hoole will get the recognition it deserves.

More like this
Science
16 hours ago
Look: Hidden fossils reveal a microscopic creature that may be resilient to climate change
By Jennifer Walter
Science
15 hours ago
How do dolphins maintain their glowing skin? A study reveals the surprising answer
By Jennifer Walter
Science
5.16.2022 10:00 AM
Pig-human heart transplants still have a long way to go
By Andrew Fenton, The Conversation and Françoise Baylis
Related Tags
Share: