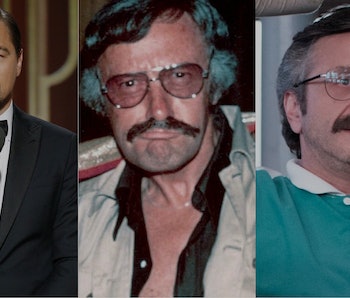 Leonardo DiCaprio wants to eventually play Marvel guru Stan Lee in a biopic. But, the only problem is, there’s already a better actor to play Stan Lee: Marc Maron.

The idea of a movie based on the life and career of Stan Lee is exciting. Not just because Lee is basically comic book Steve Jobs — in that Lee leveraged other people’s ideas to build his own brand — but because whoever plays him could ham it up all the way to Oscar gold. And if you ask Lee himself over who should play him, it would be Leonardo DiCaprio. But someone needs to let Stan Lee know that Marc Maron exists.

On September 8, in Rhode Island, at the inaugural Hasco — the official convention of Hasbro and its toy franchises (including Marvel) — Lee was at a panel when he was asked who he’d want to play him in a movie. Lee then revealed he’s already had this conversation with none other than Leonardo DiCaprio.

“Believe it or not, I’ve already discussed it with Leonardo DiCaprio,” Lee told the True Believers at Hascon. “He’s a neighbor of mine and we were talking one day some months ago, and he said, ‘Boy it’d be fun to do your story on the screen.’ So I said, ‘Well, I’ll audition you.’ Gotta make sure the guy can do it.”

There’s little doubt DiCaprio, a solid method actor who sinks into his roles without being gross like Jared Leto, would be an excellent Stan Lee in a period movie about the American comic book industry (unfortunately we’re getting some shitty Kingsman ripoff instead). But have we all forgotten about Marc Maron? Because after GLOW, Maron is just about the only man alive could play Stan Lee without an ounce of effort.

Earlier this year, the podcast host and comedian starred in Netflix’s GLOW, a period comedy about the real-life women’s wrestling league. Maron played the role of Sam Sylvia, a failed B-movie director turned wrestling promoter. With a New Jersey accent, a graying mustache, and a cigarette taking permanent residence on his lips, Maron proved through Sam Sylvia just how good his Stan Lee could look and sound.

It also helps that Maron just plain looks like Stan Lee, too.

Just watch the clip from GLOW below and imagine, instead of auditioning actresses, it’s Maron being Stan Lee while he’s yelling at movie Steve Ditko about why Spider-Man’s costume looks so damn complicated.

20th Century Fox, which currently produces a whole franchise of X-Men movies, currently owns the rights to Lee’s life and is trying to turn it into a bonkers action movie a la Kingsman or The Man from U.N.C.L.E. A normal biopic about making a living in comic books throughout the 20th century until the 21st century explosion would have been absolutely fine. Potentially great, even. But it certainly wouldn’t be Stan Lee if things weren’t just a little nuts.