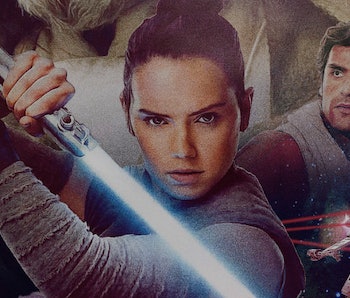 Any image from a new Star Wars movie is totally enough to get plenty of fans excited, but so far there’s been one thing missing from all the officially released posters: artistic consistency with all the previous Star Wars posters. But, new fan art corrects that, and it basically passes for the real thing.

On Wednesday, a reddit user called The Scarlet Woman shared two fan-made posters for The Last Jedi. The artist says these posters were done in “the style of Drew Struzan.” For the faithful, this means, the art style is a tribute to the guy who did all the posters for the prequels, as well as the art for the Special Edition releases of the classic trilogy. In 2015, Struzan also did a special one-off poster for The Force Awakens, thought it wasn’t widely released to promote the film. But these creations from Scarlet Woman fill the much-needed Struzan gap.

“It was also surprisingly difficult to find an image of Poe but I was able to find a high enough resolution close-up shot which made it easier to fit in,” the artist explains. “All three characters —Poe, Finn, and Rose — are quite small on this poster as Rey and Luke are the obvious focal points,”

One thing that is arguably jarring about the posters for officially released The Last Jedi so far is that they are weirdly static. Characters faces are totally obscured in the all the red posters, while the primary poster bisects Luke and Kylo Ren’s faces. This gives the official posters a contemporary feeling, which is probably not what most fans are looking for. Instead, we tend to like artistic familiarity with our Star Wars art. A sense of age is important with this stuff. Star Wars posters shouldn’t feel like they were created in 2017, but instead…a long time ago.

The Last Jedi opens on December 15 everywhere. At least one more new poster is expected before then.