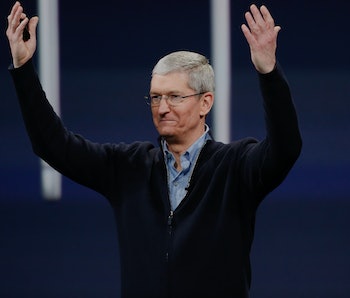 Apple is planning to announce its next iPhone on September 12, according to two reports published on Monday. The company is expected to unveil the iPhone 8 at a special event, which is rumored to make a number of radical changes including a new screen technology, a wireless charging system and a new face scanner.

The Wall Street Journal and CNBC both report that Apple will hold the event on the above date, where it will announce three new devices: the iPhone 7S, the iPhone 7S Plus and the iPhone 8. The former outlet reports that Apple plans to announce the device at the Steve Jobs Theater on the new “spaceship” campus. In classic fashion, the company has not publicly acknowledged either report.

Although Apple has yet to reveal the device, a number of leaks have revealed the iPhone 8’s key selling features, both in terms of pioneering technologies the company plans to debut and established ideas used on numerous high-end Android devices. Here are the five points Apple is likely to discuss at its event:

The iPhone 8 is expected to launch with a 5.8-inch screen that stretches to the far edges of the device. This means that the phone will have a larger screen than the iPhone 7 Plus in a device that’s a similar size to the iPhone 7.

Not only that, Apple is also expected to make the jump to OLED. Unlocked LCD, this display technology allows individual pixels to shut off. High-end Android phones use the same technology, as does the Apple Watch. In the case of the latter, Apple designed a new user interface that placed white text on a black background, making it appear to float on the wearer’s watch. The company could choose to do something similar again with the iPhone 8.

As the screen stretches to the edges of the phone, there’s not much room left for a home button. While initial rumors suggested Apple would hide the fingerprint scanner under the display, recent reports suggest it has instead chosen to use a face scanning system capable of checking the user’s identity in a matter of milliseconds. This new technology could prove to be a more useful hands-free alternative to the fingerprint, so it’s likely Apple will want to discuss this further at the show.

iOS 11, the software update expected to ship with the iPhone 8, was announced at the annual Worldwide Developers’ Conference in June. At the show, Apple explained that developers will now have access to a set of augmented reality tools, named ARKit, that will allow companies to easily produce new apps without having to rebuild the same code that superimposes virtual objects onto the real world. A laser scanner on the rear of the iPhone 8, rumored to relay depth information to the software, could make augmented reality apps more accurate than ever before.

To put this into context, the iPhone 7 Plus has a battery that typically lasts longer than a day. If you’re someone that finds themselves reaching for the charger on a regular basis, the iPhone 8 may have something in store for you.

The downside. Apple is expected to price this device at a new, third tier. Estimates range from just shy of the $1,000 mark to even as much as $1,400. The iPhone 8 may arrive with multiple tiers of storage, with one report claiming it will come with 64 and 256GB sizes. The days of owning a smartphone cheaper than a brand new MacBook may draw to a close, meaning that Apple will need to justify the higher price by focusing on the above features.

More like this
Innovation
8.1.2022 5:01 PM
The 10 best iPhone wallet cases
By Masha Vapnitchnaia
Innovation
4 hours ago
“Quantum materials” could give the human brain a run for its money, scientists say
By Nathaniel Scharping
Innovation
8.9.2022 11:00 AM
This self-healing material could fix your dinged-up car in 30 minutes
By Molly Glick
Related Tags
Share: