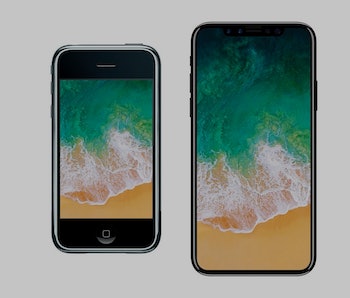 The iPhone has been on sale in the United States for 10 years as of Thursday, but the best is yet to come. When Apple co-founder Steve Jobs took to the stage at the MacWorld convention all those years ago, he promised a device that combines an iPod, a phone and an internet communicator. At the time, it seemed like a bold prospect, but today it’s rather commonplace. The company is rumored to launch the iPhone 8 in a few months time, and in the space of a decade, the flagship smartphone has improved leaps and bounds.

The first iPhone had a single 2.0 megapixel camera on the rear, combined with a basic camera app. No flash, no video recording, no in-app settings to adjust, not even a front-facing camera. Photo location tagging was done by a combination of cell tower triangulation and sensing nearby Wi-fi hotspots, as the first iPhone didn’t have GPS.

The iPhone 8 is in a totally different league. It’s expected to inherit the 7 Plus’ dual camera arrangement, which features one wide angle and one telephoto lens, both at 12 megapixels. Two flashes can vary light warmth to illuminate the subject, it can shoot 4K video, it can take “live photos” that capture short videos around photos, and it has a “portrait mode” that reproduces shallow depth of field by using data from both sensors. It’s rumored that the new iPhone will improve on this by offering optical image stabilization (for less blurry images) and a vertical arrangement to better enable augmented reality.

That’s just the rear. The front camera on the 7 Plus is a seven-megapixel shooter capable of 1080p video and FaceTime video calling. The 8 is expected to improve on this with an infrared module to enable 3D facial recognition.

But the 8 will have an unreal screen. It’s expected to measure 5.8 inches, packing an OLED display capable of producing perfect deep blacks. It’s likely to retain the iPhone 7’s exotic DCI-P3 color space, favored by industry professionals for its stunning color reproduction. We’re talking billions of colors. And one report claims the resolution will clock in at a staggering 2,800 pixels by 1,242.

It doesn’t stop there. Recent iPhones are capable of sensing pressure placed on the device, enabling “3D touch” interactions. It’s also rumored the iPhone 8 will build a fingerprint sensor into the screen, while also incorporating the home button that’s been a staple of the iPhone since the original. It’s all change.

Where the first iPhone came in 4GB and 8GB sizes at launch, one report claims the 8 will offer 64GB and 256GB sizes, the latter coming as standard on many computers.

The first iPhone had a 1,400 mAh battery, while the iPhone 8 is expected to pack a 2,700 mAh battery. The charging has all changed, too: while the original used the 30-pin dock connector present on the iPod, the new model is expected to use the smaller, reversible Lightning connector introduced in 2012. There’s even rumors the new model could bring in some sort of wireless charging.

The original iPhone came with what we may think of as “iOS 1,” but at the time Apple preferred to refer to it as a version of Mac OS X:

These days, iOS is its own brand, and the upcoming version iOS 11 introduces a new artificial intelligence platform that transforms the phone into a smart assistant out of Her:

Ten years ago, using Maps on your phone to navigate seemed like the bees knees.

The past 10 years have seen an impressive jump in specs, but Apple is not stopping there. The company has expressed an interest several times in augmented reality, and there’s rumors that Apple is exploring foldable OLED displays for future iterations. Whatever the future holds, the past 10 years show Apple has yet to run out of steam.