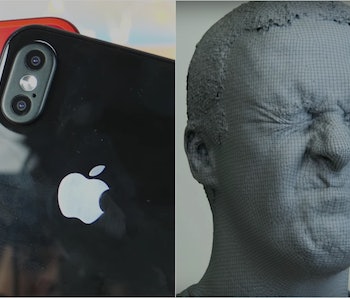 Apple has been curiously upfront about its next iPhone this year. The California-based company, famed for secrecy, released the firmware for its upcoming HomePod smart speaker last month. Unfortunately, Tim Cook’s team left a number of clues in the software that reveal several key features about the heavily-rumored iPhone 8.

The phone, set to launch this fall, will include a 5.8-inch OLED display, a virtual home button, and a front-facing 3D face scanner. The scanner will check a user’s identity in a matter of milliseconds, and could replace the fingerprint scanner as the secure yet speedy unlock method.

Developers have trawled through Apple’s firmware release and found a number of clues. Here are the six headline features discovered so far:

Developer Guilherme Rambo‏ has discovered references to “Pearl,” the internal codename for the face scanner, that suggest the system will support payments. Apple Pay, introduced in 2014, allows users with an iPhone 6 or later to complete contactless payments at supported kiosks, while a later update enabled the feature for use inside apps.

It’s unclear how kiosk payments will work if the user needs to point the phone at their face, but Apple could build on the existing system that allows users to authenticate their fingerprint ahead of time by double pressing the home button while the phone is unlocked.

This is key. If the face scanner wants to replace the fingerprint sensor, it needs to work with more than one face. The current scanner, introduced with the iPhone 5S back in 2013, supported multiple finger scans that were stored in the device’s secure enclave. Apple could use a similar system to allow multiple users to unlock the same device.

iOS 8, launched in 2014, brought third party support to the fingerprint scanner. This means that a banking app, for example, can ask for a fingerprint scan even though the phone is already unlocked. This avoids unwanted intruders accessing apps while the phone is unlocked, and also provides an extra layer of security for those concerned about accidentally leaving the phone open on the side. Support for third-party apps suggests Apple is working to ensure the face scanner supports the same features as its predecessor.

It will support augmented reality

Apple is going all-in with augmented reality, where virtual objects are superimposed into the real world. iOS 11, the next major version of Apple’s iPhone software set to launch later this year, will include a new “ARKit” system tat developers can use to create AR apps without developing the underpinnings from scratch.

Developer Steve Troughton-Smith has discovered Apple may be planning to include support for ARKit in the front-facing sensors.

It could have both front and rear face scanning

So far bloggers have assumed the iPhone 8 will have a front-facing scanner. A report last month claimed the dual lens rear camera could include a 3D laser system to enable new augmented reality experiences by providing accurate depth information.

Rambo uncovered references to a “Back Pearl”:

This suggests the rear scanner could also support authentication, or it could be that it will be used in a more limited capacity for better pictures and augmented reality apps.

It will stay silent while you’re looking at it

This one is interesting: the same infrared depth sensors used to scan the face may also be used to determine whether the user is looking at the device. If they are, the phone could mute incoming tones and alerts. This would make for a welcome change from the current system, where the only ways to turn off sounds are either to switch on Do Not Disturb mode in the control center, or to flip the ringer switch.