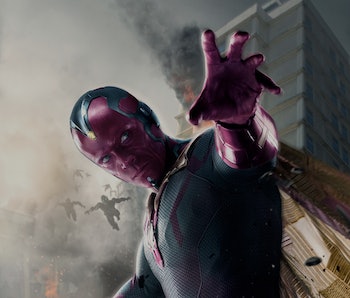 Of all the Avengers in the Marvel Cinematic Universe, Vision is arguably the most powerful. But, will Vision survive the catastrophe in Avengers: Infinity War? Actor Paul Bettany hints that the sentient A.I./hybrid will live to see the fourth, untitled Avengers movie, slated to premiere in 2019.

In an interview with Collider, Bettany called Infinity War “the biggest movie that I’ve ever made and will make,” before quickly hinting he’s got another one in store. “We’ve still got to make the [next] one. It’s fucking crazy!” Bettany said.

Bettany’s candid comments are actually revealing. In Avengers: Infinity War, Thanos will set out to collect all six Infinity Stones, granting him ultimate power in the universe. Because Vision is seemingly powered entirely by the Mind Stone, plucking it out of Vision’s forehead could very well be fatal for him — and for the Avengers, who would lose one of their strongest tanks.

For what it’s worth, Mark Ruffalo recently joked that “everybody dies” in Infinity War. So, does Vision count as an “everybody”?

Although Marvel hasn’t announced the title yet, there will be a direct sequel to Avengers: Infinity War that will be released in 2019. That should illustrate just how big the fight against Thanos will be, as the heroes of the MCU (excluding the Defenders, sorry) must band together to save not only the universe but the very fabric of reality.

Bettany spoke to Collider while promoting the new TV series Manhunt: Unabomber, in which he portrays the domestic terrorist Ted Kaczynski, but he took a moment to describe how large a scale Infinity War operates on. “I would come in, often at dawn because of the length of my make-up, and there would just be all of these twinkling lights. It looked like a town, but it wasn’t. It was where all the trailers were.”

Bettany joked that the call sheets for the film was “bananas” because of all the stars attached. “You’re like, ‘How is anybody else making a film in Hollywood this year? How are they getting films financed? Everybody is in this!”

More like this
Culture
3 hours ago
8 Norse gods you need to know before Thor: Love and Thunder
By Robin Bea
Entertainment
6.22.2022 11:30 AM
Marvel’s Kevin Feige teases a fix for Phase 4’s biggest problem
By Eric Francisco
Entertainment
7.5.2022 1:00 PM
Like Guns N Roses, Thor: Love and Thunder asks: Where do we go now?
By Eric Francisco
Related Tags
Share: