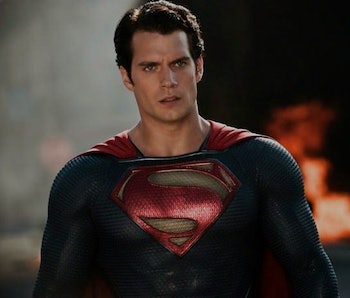 Even though Superman died at the end of Batman v Superman, Warner Bros. and DC aren’t even pretending that the Man of Steel won’t be flying through Justice League. They haven’t released any official photos or many details, though, so fans have had to look for other sources of information. Now, at Comic-Con, the uncannily accurate toy company Hot Toys has unveiled a prototype figure for Superman as he’ll presumably appear in Justice League, and his costume looks subtly different. It’s brighter, which seems to go against the theory that the resurrected superhero will wear his black suit, as he famously did in the comics.

The image, which Hot Toys posted to its Facebook page on Thursday morning, shows a slightly more saturated Superman. It’s possible, of course, that he won’t actually be any brighter in the final movie, and this is just a preliminary design or different color because of the materials it’s made out of. But, Hot Toy’s figures are insanely movie accurate, so it’s reasonable to think there’s a method behind the lighter colors. Plus, Wonder Woman, by far the best-reviewed and best-liked movie in the DC Extended Universe, was much more colorful than its predecessors. DC might’ve realized that they don’t need to make all their movies gray.

If Superman’s digs will indeed be more vibrant when he comes back to life in Justice League, it would be pretty much the opposite of what everyone’s expecting. After he was first killed in the comics’ Death of Superman arc (also by Doomsday, natch), he returned during the Reign of the Supermen! arc wearing a black Kryptonian battle suit to help him harness the sun’s restorative powers.

Now, Cavil’s Supe could still wear a black suit in Justice League. Remember, almost a year ago, actor Henry Cavil Instagrammed a close-up picture of what looks like a black Superman suit. As usual, there’s no context, so it’s equally hard to say this is confirmation that they’ll be a noir Superman in Justice League.

The brighter outfit Hot Toy’s figure revealed seems to suggest that, if Superman does wear the black suit at all, he won’t wear it for the entire movie. This, in turn, suggests that he’ll be revived early enough into the film in order to merit having two separate costumes.

This has been a deep dive into Superman’s potential wardrobe.