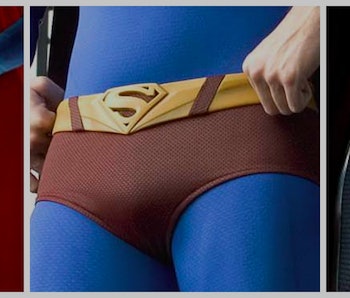 Whether you want to admit it or not, if you’ve read a Superman comic or watched any of his many TV shows and movies, you’ve thought about the Man of Steel’s bulge. Because he’s a guy wearing a skin-tight outfit, every single part of Superman is accentuated, including his fortress of solitude. 38 years ago this weekend, Richard Donner’s Superman movie was promoted with the tagline “You will believe a man can fly.” The visual effects were impressive, but what he was packing behind his fly was impossible not to notice.

The history of Supermans “bulge” goes all the way back to his very first appearance in Action Comics #1 in 1938. Back then, when Superman was drawn by Joe Shuster, his trunks and crotch area were pretty flat, meaning his bulge was almost non-existent at the start of his illustrious career. We’ll never know, but it’s possible that the Last Son of Krypton was tucking in those days, or just very confused about how people deal with their private parts. After all, why was he wearing “underwear” on the outside of his tights?

In truth, the red “undies” were not supposed to actually be external underwear, at all. In writing about superhero trunks in 2011, Jim Beard pointed out that the trunks are connected to the “proud heritage of the circus performer,” not some kind of external male lingerie. Still, as Superman’s popularity grew, so did the size of his bulge. Ain’t that the way it always works?

While the package was barely seen in the ‘30s and ‘40s in the official Superman comics, Shuster did secretly illustrate underground fetish cartoons titled “Nights of Horror” in the 1950s. In Craig Yoe’s 2009 book Secret Identity: The Fetish Art of Superman’s Co-creator Joe Shuster, it’s made clear that a simulacrum of Superman — drawn by Superman’s creator — was running around in 1954, flouting his sizable bulge. According to Secret Identity and Tim Hanley’s 2016 book Investigating Lois Lane, Schuster almost certainly drew these erotic — and secret — versions of Superman for the money only, but still, the bulge was out. By 1957, when the ongoing comic Lois Lane: Superman’s Girlfriend was launched, artist Kurt Schaffenberger’s take on Supe’s bulge was a little more pronounced. There’s no proof that the secret Schuster art inspired Schaffenberger’s slightly bigger bulge, but as the ‘60s approached, Superman’s bulge got girthier.

While the ‘40s gave the world the first radio Superman, as voiced by Bud Collyer, listeners learned nothing about Supe’s bulge from the radio show for obvious reasons. But in 1948, Superman’s super-friend became flesh-and-blood, as the first on-screen version of Man of Steel emerged starring Kirk Alyn. Recalling his casting in a 1979 interview in Starlog, Alyn described his audition, mentioning he was first asked to take his shirt off, and then, more: “I was in good shape at the time … the [auditioner] said ‘Kirk, take your pants off … I was shocked … but [the auditioner said] … ‘I have to see what your legs look like’ … “

Legs? Yeah right. Hollywood has a long history of this crap.

In the Kirk Alyn limited theatrical serials, Superman’s sidekick is totally there. It’s not huge, but it is noticeable. But, by 1951, George Reeves would become the most famous on-screen Superman in the TV show The Adventures of Superman, and his bulge was decidedly flatter than Kirk Alyn’s. Reboots are rarely as good as the original thing.

In the comics published by DC in the ‘60s and the ‘70s, the fate of Superman’s bulge would rise and fall. But in 1966, first super-bulge to hit Broadway emerged. In the Broadway Musical It’s a Bird…It’s a Plane…It’s Superman! Bob Holiday played a singing Man of Steel, with a hidden kryptonian rocket in his tights. Holiday told Inverse that he “wore some form of protection, the morals of the 1960s demanded it. And no, there was no sock used.”

But in 1978, the onscreen bulge was redefined forever. When Christopher Reeve became the Man of Steel in Superman: The Movie, the bulge was really super. Film legend has it that the movie’s producers — Alexander Salkind and Ilya Salkind — specifically wanted Reeve’s Superman to have the biggest codpiece of all the Superman up until that point.

In fact, Illya Salkind supposedly said that “either he has a big one, or he has nothing!” Reeve’s giant codpiece didn’t reflect his natural anatomy. There was some metal in that particular design to both make him look “big,” but also not make him look organic. So, if you punched Superman in the crotch in 1978, you would be met with actual steel.

Reeve’s bulge remained fairly constant all the way through his final appearance in 1987’s Superman IV: The Quest for Peace. And this super bulge wasn’t rivaled for nearly 20 years. In 1992, DC Comics “killed” Superman in its famous “Death of Superman” arc only to resurrect him in 1993. Notably, when Superman came back to life in these comics, he sported a mullet and an all-black suit, which mostly hid any suggestion of a super bulge. During the entire run of Smallville, Tom Welling never was seen in the Superman costume for an extended period of time, meaning there wasn’t much of a bulge to examine.

But all of Superman returned when Bryan Singer’s 2006 film, Superman Returns brought the Last Son of Krypton back to the cinemas for the first time in nearly two decades. Serving as a kind of loose sequel to the first two Reeve films, Brandon Routh’s super-trunks were tighter than any previous on-screen version of Superman before. In fact, Routh’s “package” was the subject of fan and media speculation. Like Christopher Reeve before him, tending to Brandon Routh’s super-bulge was someone’s actual on-set job for Superman Returns. Louise Mingenbach was the costumer designer on Returns and told Newsweek at the time that “There was more discussion about Superman’s ‘package’ than anything else on the suit.” And according her, the powers-that-be on the film ultimately ruled that the size of the package was “not big,” though everyone who saw the movie can judge for themselves. Either way, the urban myth that Brandon Routh’s bulge was shrunken — or enlarged — by CGI effects seems to be false.

When DC comics launched the “New 52” in 2011, Superman lost his signature red trunks, and seemingly, his trunk snake, too. Early versions of this Superman showed him with basically the same flat-crotch-tucking-action as the 1938 Superman. Only this time, there wasn’t even any different color to distinguish this part of Supe’s manhood.

But the biggest bulge was yet to come. Because when Zach Synder brought Superman back to the big screen again in 2013’s Man of Steel, he kept the trunks off of the Man of Tomorrow, but showed off the bulge in a big way. Generally following the new 52’s all-blue, no-trunks look, Henry Cavill’s contemporary Superman easily has the biggest bulge of any iteration of the character, ever. This super-dong is unapologetic and actual confronts the viewer with a question: I dare you not to look.

Even though Cavill’s Superman supposedly died in Batman v Superman, he and his Man of Steel will certainly be back in Justice League. Because, from the moment he was thought up by Jerry Siegel and Joe Shuster, to all the on-screen versions and beyond, Superman’s bulge will never, ever die. Even the new Tyler Hoechlin version of Superman on the CW’s Supergirl looks a little boned-up in those tights. We know Supe can leap buildings in a single bound, shoot lasers out of his eyes, and make time itself go backward by rotating the Earth in reverse. But the one superpower he doesn’t have, at least right now, is any modesty. If we’re lucky, it will stay that way.