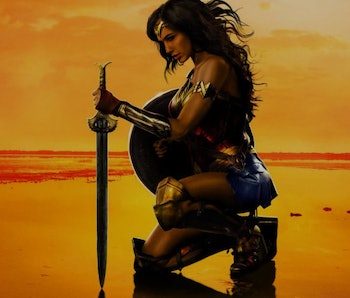 The success of Wonder Woman, with its rave reviews and $100 million estimated opening weekend, makes clear to Hollywood once and for all two very important principles: People will see movies about female superheroes, and women can and should direct superhero movies. Equally clear, if not nearly as important, is that it’s time to drive away for good the “dark and gritty” cloud that has hovered over comic book movies and turned them into gray, self-serious slogs instead of escapist pop entertainment.

Even before Christopher Nolan injected grim fatalism into his spiritual adaptations of Frank Miller’s “Dark Knight” Batman comics, Zack Snyder introduced the hyper-masculine and dour aesthetic into blockbusters with his adaptation of Miller’s graphic novel The 300. That movie was a hit, setting the table for the adaptation of Miller’s Sin City, and then Snyder took over the DC Comics reins for 2013’s Man of Steel and last year’s dreadful Batman v Superman: Dawn of Justice. Sure, Nolan’s movies are considered classics (really, it was just two decent movies sandwiching a great one), but five years after his last entry, the sub genre of Nine Inch Nails videos masquerading as superhero movies has become completely exhausted.

Enter Wonder Woman to save the day, with her lasso of truth and indefatigable sense of optimism. Starring Gal Gadot, who returns as the character after providing the lone bright spot in Batman v Superman, the movie is the first DC Comics outing since 2006’s forgotten Superman Returns to not be drenched in pouring rain and incessant reminders of the evil that lurks inside all men. And it’s not as if director Patty Jenkins’s movie is a naive fantasy removed from the harsh realities of the modern world; most of the action takes place during World War I, an absolutely hellish and foolish war waged over greed and ego.

The difference between Wonder Woman and the previous DC movies is how it views the foibles of man and the endless suffering they cause. Raised on a secret island of powerful women, Diana — who grabs the lasso for good at the end of the first act — was raised to be relentlessly positive. She was sheltered by her mother but also trained to be a warrior, and was told that all evil perpetrated by man is due to the wicked influence of Ares, the god of war. When the war lands on the coast of her island home in the form of an American spy named Steve Trevor (Chris Pine), chased by enraged Germans, Diana deduces that Ares has returned, and it’s up to her to vanquish him.

Much of Wonder Woman focuses on Diana’s quest to find Ares, during which she learns about the modern world. It’s both a funny fish-out-of-water tale (she likes ice cream and carries her sword in crowded city squares!) and a portrayal of extreme bravery (her run across the front lines to liberate a captive town is inspiring). She’s joined by Steve Trevor and a motley crew of buddies; they’re trying to stop a horrific chemical attack by a rogue German general and regard Diana’s belief in Ares as a misguided quirk that they’ll indulge so long as she helps them save the day.

Batman v Superman was a largely humorless and miserable affair, and even Suicide Squad, which felt like BvS remixed by the Insane Clown Posse, downplayed the twisted glee inherent in its premise. And no doubt, Wonder Woman suffers no shortage of violence or images of suffering. But it is not preoccupied with tragedy porn, and doesn’t condemn all of humanity for the extreme acts of its worst offenders. And as in war, where laughs are often the only refuge soldiers have, there is plenty of comedy and good feelings in Wonder Woman; audiences can laugh at the fish-out-of-water dynamic of Diana’s visit to the real world, and smile at the natural chemistry between Gadot and Pine. Even the cinematography evokes a lighter, more hopeful tone.

Most important, Wonder Woman does not treat the triumph of evil as fait accompli. Diana is relentlessly optimistic, believing that when she defeats Ares, “men will be good again, and the world will be better.” It helps that her optimism is based, in part, on her conviction that there is a single cure-all for war and evil, but nonetheless, that belief drives much of the movie, which takes its tonal cues from its titular protagonist. When she refuses to accept that there are some men who do not have good in their hearts, so does the audience.

I won’t spoil the ending, and whether Ares actually does exist, but it does not matter to the ultimate message of the movie. Diana refuses to participate in any acts of evil, and straight up tells the audience that “only love can truly save the world.” You can’t imagine Ben Affleck’s grizzled Batman saying anything like that; not even the new version of Superman — the hero who stood up for “Truth, Justice, and the American Way” — would speak with that kind of optimism.

Marvel Studios has cracked this code to some degree. The Disney-owned company’s movies are much more fun and colorful, with rag-tag teams like the Guardians of the Galaxy and wise-crackers such as Ant-Man. And clearly, Marvel’s movies have been much more successful than the ones made by DC and Warner Bros., both with critics and at the box office. That alone should have given their rival studio a clue. And ironically, Wonder Woman takes that bright, fun, optimistic approach to the next level, because not only is it present in the color palette and jokes, but also in the message behind the film.

Justice League will hit theaters later this year, and it’s already deep into post-production. But Joss Whedon, who helped establish the Marvel tone by consulting on early films and writing/directing The Avengers, is directing a Batgirl movie, and that portends well for the future of DC. Meanwhile, it’s unclear if the upcoming Aquaman, which just went into production, has any sort of levity to it, but if not, maybe director James Wan will take the hint and inject some laughs into the screenplay before it’s too late.

Wonder Woman is significant for a lot of important social reasons, and in some ways, the tone of comic book movies pales in comparison. But if we’re going to be inundated with superhero movies for the next decade, they might as well be fun.