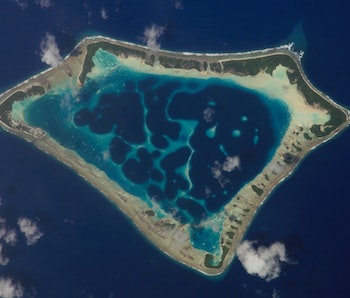 Earth’s political boundaries will always shift as conflict rises and regimes fall. We are used to this sort of change and the out-of-date maps it produces. But nothing in the history of human diplomacy has prepared us for what’s coming next — countries that physically cease to exist as the land they are made of is swallowed up by rising seas.

For low-lying nation states like the Maldives, Tuvalu, the Marshall Islands, and Kiribati, it’s not a question of if, but when. Keeping the world to two degrees Celsius of warming, the stated goal of the Paris Agreement on climate change, would still result in 15 feet of future sea level rise, according to analysis by Climate Central. At 16 feet, the Maldives and Tuvalu would be completely submerged. The Marshall Islands would be 99 percent underwater, and Kiribati 97 percent. Even a few feet of sea level rise — within the realm of possibility for this century — would devastate these countries and permanently change their landscapes.

“Life is difficult enough on these small islands, surrounded by the vastness of the ocean, without adding the challenges of sea level rise, more dangerous extreme weather, and the loss of food and fresh water resources,” write Andrew Holland and Esther Babson of the American Security Project in a recent report for the Center for Climate and Security. The islands have made up for their small populations and poor resources by forming alliances with each other, and yet a humanitarian crisis is almost guaranteed.

Kiribati has made some effort to plan for the future, by purchasing land in Fiji that currently grows food for the people of Kiribati and may one day house them as well. But it’s most likely that the exoduses will happen in sudden moments of crisis, when storm surges flood whole islands and poison freshwater resources. “What we should expect is more uncontrolled migration from island to island, to cities and developed countries,” write Holland and Babson.

Where will climate change refugees go when their homes are destroyed, and will they be welcomed when they arrive? Will the magnitude of the crisis prompt nationalist, reactionary policies that see borders shut down and xenophobia climb? You might say that’s already happening today, with refugees from Syria’s brutal war, set off in part by climate change, being portrayed as potential threats in the mainstream discourse of the United States, Europe, and elsewhere.

And what happens to the political entity of a nation state when its physical land is abandoned? What rights do former inhabitants still claim to that region and the economic resources it may still hold? Currently the island nations lay claim to an exclusive economic zone that extends 200 miles in all directions. Who will own the rights to fish when the land is all but gone? The international community has yet to grapple with these questions, and there will be no easy answers.

China has shown an increasing interest in the region, and has upped climate change aid to these countries dramatically. One motivation could be a desire to ultimately have more say in who gets to control these island resources when the people move away.

A power struggle between countries vying for influence is possible, and preventing it will depend on a great deal of international cooperation in a forum where the ground rules have yet to be invented.

The recent promise of United States President Donald Trump to withdraw from the Paris Agreement ups chances that nations will look to their own interests before helping their neighbors. The U.S., after all, is the richest country in the world and the one that has contributed the most to climate change. If it will shirk responsibility for the damage it has wrought, why would another step up?

And the rest of the world will certainly have its own troubles. “These problems are not unique to small, poor island nations,” write Holland and Babson. “It is only that they will be forced to deal with them first.”