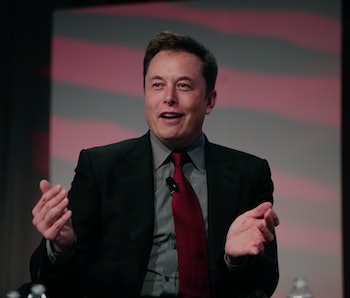 On the heels of President Donald Trump’s early morning tweet that he would make an announcement in a few days on whether the United States would go back on its word to abide by the environment-protecting Paris Agreement, climate watcher, serial entrepreneur, and unofficial Trump advisor Elon Musk said he’s done all he could to convince the White House to stick with the rest of the world.

“Don’t know which way Paris will go, but I’ve done all I can to advise directly to POTUS, through others in WH & via councils, that we remain,” Musk tweeted to his 8.8 million followers on Wednesday, adding that he would “have no choice but to depart councils” if Trump did go through with the exit. Trump is largely expected to pull out, which could have a devastating effect on the worldwide plan to reduce pollution.

Musk has been criticized for working with Trump but defended his position on the councils: “At least words were said,” Musk told an interviewer at the 2017 TED conference.

“I’ve used the meetings I’ve had thus far to argue in favor of immigration and in favor of climate change,” Musk said in April. “If I hadn’t done that … it wasn’t on the agenda before.”

The councils Musk speaks of would be the business advisory council and economic advisory, of which he’s a part, along with various other CEOs from American industries. Musk is a member as CEO of SpaceX, the aerospace company, and Tesla, the electric car company that recently got into the residential solar panel business when its shareholders agreed to acquire SolarCity.

Beyond Musk quitting the advisory council, of course, Trump’s action could have far-reaching environmental impacts. The agreement calls for participating countries — 147 of 195 countries that were party to the 2015 United Nations Climate Change Conference, aka COP 21, have ratified it — to come up with plans to reduce carbon emissions. The goal is to curb global temperatures from rising 2 degrees Celsius (3.6 degrees Fahrenheit) above pre-industrial levels. Anything higher will have devastating ripple effects on every ecosystem on Earth.

The framework of the COP 21 agreement was hammered out late November and early December 2015. “No Plan B” was the rally cry around the conference, and the message was presented in ALL CAPS on the Eiffel Tower.

“History will remember this day,” said UN Secretary General Ban Ki-moon in December after the agreement was reached. “The Paris agreement on climate change is a monumental success for the planet and its people.”

By 2020, the 195 that agreed to the deal would have to submit to the UN “long-term low greenhouse gas emission development strategies,” and do so every five years after.

Temperatures have been rising dramatically in recent years as China, India, and the United States increased industrialization and carbon emissions into the atmosphere, heating it up and warming the planet.

The majority of countries signed the Paris Agreement on April 22, 2016 at the United Nations in New York. Leonardo DiCaprio even gave a speech, forcefully saying, “No more talk, no more excuses, no more 10-year studies.”

President Barack Obama signed the agreement on September 22, 2016, before leaving office. The New York Times observed on Wednesday that “Mr. Trump appears to have decided that a continued United States presence in the accord would harm the economy; hinder job creation in regions like Appalachia and the West, where his most ardent supporters live; and undermine his ‘America First’ message.”

While Musk seems prepared to ditch Trump’s advisory council — perhaps feeling that his words have fallen on deaf ears — one wonders what other industry leaders will move away from a president who doesn’t believe in climate change.