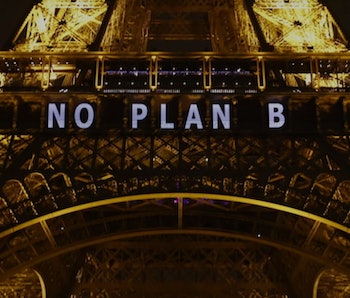 Around 7:30 p.m. local time Saturday, world leaders in Paris adopted a 31-page agreement that calls for every country — even the big polluters like China and India — to make real contributions to limit carbon emissions.

Alone, it’s not a world-saving agreement — the time for those has come and gone — but it’s more of a final, last-ditch plan to curb global temperatures. The big sticking point is that 195 countries have agreed to take part — and did so with cheering, urgent enthusiasm, according to some reports from Paris, while others likened the scene to a “stupid business conference.”

Wrote U.S. Secretary of State John Kerry on Saturday: The “world has chosen a smart, responsible path forward” and that the “agreement is the strongest, most ambitious global climate agreement ever negotiated.”

Collectively, the goal is to stop temperatures from rising more than 2 degrees Celsius (3.6 degrees Fahrenheit) beyond pre-Industrial levels. In the agreement is language that countries hope to limit that increase to just 1.5 degrees Celsius.

By 2020, the 195 countries have to submit to the UN “long-term low greenhouse gas emission development strategies” and do so every five years after.

UN Secretary General Ban Ki-moon memorably said in September 2014 that there was no “Plan B” for preventing global warming, because there’s no “Planet B” — that we’ve found anyway. On Friday night, the Eiffel Tower lit up with that phrase — “NO PLAN B” — as well as “DECARBONIZE,” “CLIMATE SIGN,” AND “1.5 DEGREES,” not-so-subtle reminders and clues that the adoption of this agreement was a matter of when, not if.

On Saturday, Ban said, “What was once unthinkable is now unstoppable. It’s a good agreement and you should all be proud.”

“History will remember this day. The Paris agreement on climate change is a monumental success for the planet and its people.”

Here’s how we got to the Paris agreement: In 1992, world leaders met in Brazil to talk green diplomacy at the Rio Earth Summit, which launched the idea of the annual climate change talks, or the Conference of Parties Convention (COP for short). In 1997, the COP talks resumed in the Kyoto Protocol treaty where 37 industrial nations agreed to reduce greenhouse gas emissions by 5.2 percent (from 1990 levels) by 2012. China and India faced no restrictions from Kyoto, and today are the world’s biggest polluters. In 2009, leaders at the conference in Copenhagen came back empty-handed and failed to agree on anything binding. In 2011 at the Durban Climate Change Conference, leaders laid the groundwork for the legally binding agreement to be adopted by 2015 — which happened in Paris Saturday

Heading into the talks that began on November 30, there were big questions about if a deal would be made and additionally, if it would have any teeth. It has more binding articles than previous deals that left China and India without restrictions, but still doesn’t require developed countries to give $100 billion a year to poorer ones to deal with the landscape-changing effects of rising seal levels and monster storms.

There will be a signing ceremony on April 22, 2016 at the United Nations in New York City.