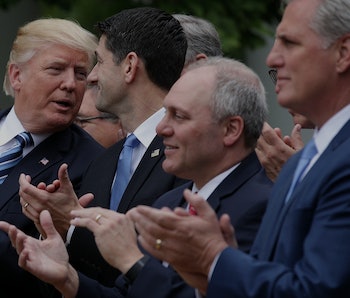 On Wednesday, the Congressional Budget Office released its score for the Republican-sponsored American Health Care Act, which would repeal the Obama-era Affordable Care Act, or “Obamacare”. The report shows that so-called “Trumpcare” would cause 14 million people to lose health insurance next year and 23 million to lose it by 2026.

An earlier version of the bill — which Republicans gave up on in March after not being able to get the votes — was projected to eliminate healthcare for 24 million people by 2026.

The new version of Trumpcare passed the House of Representatives 217 to 213 on May 4, before the CBO had time to do the report on its expected effects.

Democrats — who unanimously voted against the bill — called the vote irresponsible, since Congress lacked CBO data on how much the law would cost. The new report fills in these missing details.

The CBO analysis shows that Trumpcare would indeed lessen the federal deficit, but that the reduction would total $119 billion, which is around $32 billion less than the $151 billion that had been estimated for a previous version of the bill in late March. The savings would largely be taken from subsidies that had previously existed for citizens unable to independently afford health care coverage, leading to the projected figure of 23 million people losing insurance over the next decade.

“Premiums would vary significantly according to health status and the types of benefits provided, and less healthy people would face extremely high premiums,” reads the CBO report.

The report further explains that 51 million people below the age of 65 would lack health insurance in 2026 under Trumpcare compared to the 28 million who would be uninsured in 2026 under Obamacare. “Under the legislation, a few million of those people would use tax credits to purchase policies that would not cover major medical risks,” it notes.

Senate majority leader Mitch McConnell told Reuters on Wednesday that he was feeling uncertain about the prospects for reaching the 50-vote threshold needed to pass Trumpcare. “I don’t know how we get to 50 at the moment. But that’s the goal.”

This long-awaited score may change the conversation around Trumpcare. Senate Republicans are currently working behind closed doors to amend the bill into a more popular version that might draw in 50 supporters in Congress. The next vote could be soon, or it could be years away.

More like this
Science
6.28.2022 4:52 PM
1.8 billion people face once-in-a-century flooding, study reveals
By Tara Yarlagadda
Mind and Body
7.5.2022 2:00 PM
How do painkillers work? Pain scientists explain, from ibuprofen to fentanyl
By Benedict Alter, Rebecca Seal and The Conversation
Mind and Body
7.4.2022 2:00 PM
Is vegan cheese good for you? A nutritionist reveals one type may be better than others
By Richard Hoffman and The Conversation
Related Tags
Share: