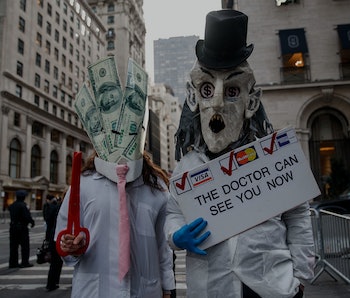 On Thursday, the House of Representatives narrowly voted to pass a measure to repeal the Obama-era Affordable Care Act (ACA) and replace it with the Republican-sponsored, President Donald Trump-endorsed American Health Care Act (AHCA).

So what exactly is a pre-existing condition? And does this new bill actually maintain the level of protection offered by Obamacare?

Controversially, it’s possible that insurers might choose to consider conditions that are the result of rape to be pre-existing conditions, should states relax standards that prevent them from doing so.

That’s something, again, that states would theoretically vote on, but consequences from rape — such as HIV, abortion services, STDs, and others could be classified as a result of a pre-existing condition. This can be potentially dangerous: It can create an environment where risky alternative medicine and other forms of birth control is practiced, self-induced abortion is practiced, and more.

Obamacare made denying coverage based on pre-existing conditions illegal nationwide. Trump’s AHCA effectively shrugs and leaves that decision to waive the standards to the states.

Trump’s AHCA plan isn’t yet law, however — it still needs to pass the Senate. A vote has not yet been scheduled.

More like this
Science
6.28.2022 10:00 AM
How are drugs absorbed in the body? The science of medicine, explained
By Tom Anchordoquy and The Conversation
Science
6.26.2022 11:00 PM
The powerhouse of the cell has a more complicated origin than we thought
By Viviane Callier and Knowable Magazine
Science
6.16.2022 10:00 AM
Climate change and air pollution are wrecking children’s health, a landmark review reveals
By Tara Yarlagadda
Related Tags
Share: