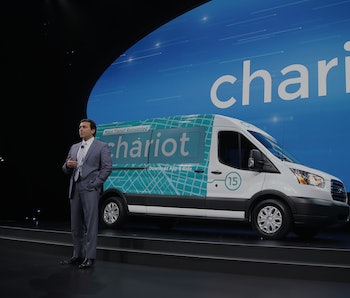 On Monday, Ford CEO Mark Fields “elected to retire” from the company, giving his job to the top executive in charge of the legendary automaker’s most future-focused projects, including autonomous vehicles and “smart mobility” plans like ridesharing and more.

Jim Hackett, the former executive chairman of Ford Smart Mobility, took the reins from Fields on Monday, the company formally announced in a statement. Fields is out, essentially, because the company had been struggling to revenue and stock prices had been on a decline, but the shift to Hackett is also an explicit endorsement that the future of mobility lies outside of traditional gas guzzlers and in mass transit, electric vehicles, and self-driving cars.

For the past six months at least, Fields has certainly been talking the talk: he declared the world to be on the “cusp of a mobility revolution” at the L.A. Auto Show in November, and has been outspoken on the future of autonomous cars. But Ford’s stock wasn’t reflecting it: it’s Tesla, not Ford or GM that’s the higest valued car company in America, and apparently the Ford board of directors wanted Fields to fight harder for the top spot (Ford’s shares dropped 40 percent over the course of Fields’s time as boss).

The company says his successor, Hackett, will focus on three things: “sharpening operational execution, modernizing Ford’s present business and transforming the company to meet tomorrow’s challenges.” Those basically mean the same thing: get things shipshape, and push resources toward autonomy, alternative fuel sources, and other mobility solutions. Ford’s big plan is to have a fully-autonomous vehicle on the roads by 2021, specifically re-inventing urban transportation with a focus on ride-sharing. Its guinea pig for this shift is Chariot, a ride-sharing startup Hackett’s Smart Mobility branch acquired in 2016. For better or worse, the company is also setting more pragmatic goals than its competitors. Unlike Tesla, Ford isn’t promising “cross country autonomous road trips” — a fanciful idea that Elon Musk may or may not be able to deliver — but a solid, stable form of autonomy in designated, heavily-mapped “geofences.”

It’s Hackett’s first day, but he’s got a huge company to lead in a massive industry that’s changing by the minute. Even if you’re not a Ford car buyer, what the big companies like Ford and GM do shapes the industry as it adapts, so we’re all along for the ride.