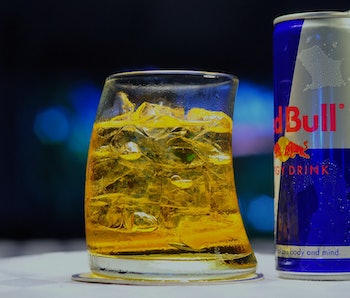 Nightclubs and bars make a killing on energy drink cocktails. Despite repeated warnings from scientists about how dangerous they are — people sometimes stay awake so long that they drink to near-fatal excess — they’ve maintained their status as a go-to beverage for all-night partiers.

But a new study suggests you don’t even need the energy drink to feel its effects.

“Does Red Bull Give Wings to Vodka?” is the partial title of an article published on Thursday in the Journal of Consumer Psychology, in which scientists answer the titular question with “yes, but not in the way you think.” By getting 154 young men drunk on mystery cocktails in Paris, the University of British Columbia Sauder School of Business and INSEAD researchers found that Red Bull does give vodka wings — that is, it makes people feel more drunk — but it can do so using the power of suggestion.

“Red Bull has long used the slogan ‘Red Bull gives you wings,’ but our study shows that this type of advertising can make people think it has intoxicating qualities when it doesn’t,” said lead author and UBC professor Yann Cornil in a statement. “Essentially, when alcohol is mixed with an energy drink and people are aware of it, they feel like they’re more intoxicated simply because the marketing says they should feel that way.”

The young men that participated in the study thought they were being offered a variety of drinks, but they were actually all the same cocktail of vodka, Red Bull, and fruit juice. Some got a drink labeled “vodka-Red Bull cocktail.” Others were served the “vodka cocktail” or the tantalizing “exotic cocktail.” After turning up on these mystery drinks, the men completed some tasks on a computer that were meant to measure how drunk, sexually aggressive, and willing to drive they had become after drinking.

The researchers found that all of the men reached about the same level of drunkenness, but what varied was how drunk each guy thought he was. Emphasizing that there was Red Bull in the cocktail increased “perceived intoxication” by 51 percent relative to the cocktails that left its presence out of the labels. These skewed perceptions played out in their behavior: Men who thought they were drunk on a Red Bull cocktail were more likely to chat up attractive women and think they’d be successful. They were more risky in gambling games. They also tended to be the guys who’d previously said they believed that mixing energy drinks and booze would boost the effects of drinking. (To their credit, they were also smarter about not driving while intoxicated.)

Belief, it seems, was enough to get them drunk.

What the researchers had inadvertently found was that energy drinks have a placebo effect — which has some serious implications for the way they’re marketed. While it’s one thing for a guy to deliberately suck down a Red Bull-vodka with the intention of getting so drunk that his guard comes down, it’s entirely another matter when a consumer manifests those effects inadvertently. The researchers think the effect is dangerous enough that Red Bull has a responsibility to rethink its marketing strategy.

“Given the study’s findings about the psychological effects of energy-drink marketing, energy drink marketers should be banned from touting the disinhibiting effects of their ingredients,” said INSEAD marketing professor Pierre Chandon, a study co-author, in a statement.

Moral obligations of marketers aside, for partygoers, this study is a reminder that a large part of drunkenness is psychological — and that perhaps that extra cocktail ingredient, or that extra drink, is not as necessary as you may think. In any case, as evidence mounts that consuming energy drink-alcohol combos cause people to make especially bad decisions and hits the brain like a line of coke, it doesn’t hurt to know that flying on Red Bull’s wings is really all in your head.