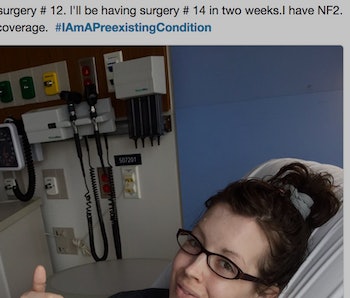 After the House of Republicans voted to pass the American Health Care Act (AHCA) on Thursday, Twitter immediately jumped to respond in the most poignant way possible: with personal stories about pre-existing conditions that might prevent them from receiving insurance coverage if the AHCA passes the Senate. Users bravely shared their health struggles in raw detail using the hashtag #IAmAPreexistingCondition.

It all started with a tweet from @HuffPostWomen bringing the hashtag back into the public eye. (It was used intermittently when the Affordable Care Act was being debated.)

Twitter responded with descriptions of battles with cancer, kidney disease, down syndrome, depression, PTSD, cerebral palsy, and many, many more illnesses. They mentioned pregnancies, C-sections, and rape, all of which also have the potential to affect insurance coverage under the AHCA, depending on how individual states act upon the law.

In response to a comment by Alabama Congressman Mo Brooks that “people who lead good lives” and “have done things the right way,” many on Twitter pointed out that they’d been born with their medical conditions. Others described how their conditions were the result of serving in the United States military. “As a woman I have survived being raped while serving in US Army,” one said, and another, “I’m a disabled veteran that suffers from PTSD.”

If lawmakers won’t be moved by policy arguments, maybe they’ll be moved by some of these heartbreaking stories.

The next step for the AHCA is a vote in the Senate, for which there is no set date yet.

More like this
Science
8.6.2022 11:00 PM
Senior dogs could help us understand an incurable brain condition
By Lesley Evans Ogden and Knowable Magazine
Mind and Body
8.14.2022 3:00 PM
Cultivating 2 habits in your 30s may boost mental health in old age
By Sarah Sloat
Mind and Body
6 hours ago
Sunscreen is crucial for public health — it must be safe for the environment, too
By Karen Glanz, Robert Richmond and The Conversation
Related Tags
Share: