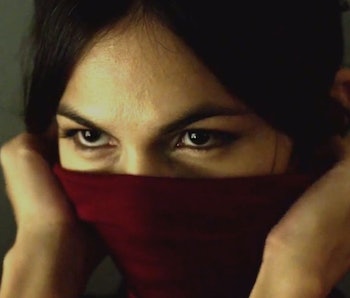 We don’t know a ton about whatever nefarious plot is going to bring the Defenders together in their upcoming team-up series on Netflix. Sure, we know Sigourney Weaver is the principal villain, and there was that brief elevator teaser that dropped last month, but a new teaser trailer offers up a glimpse at another major development: Elektra’s inevitable resurrection.

Despite saving Matt and dying at the hands of Nobu in the conclusion to Daredevil’s second season, Elektra has been slated for a return in The Defenders; they’ve already teased as much. Now, with the newest teaser, we know that the Hand is using its typical resurrection methods, that have been explored in both seasons of Daredevil and Season 1 of Iron Fist, to bring their revered Black Sky back to life. We hear a thunderous heartbeat as someone pours harvested blood into the stone sarcophagus we saw Elektra placed into in the post-credits scene of Daredevil Season 2. At the final moment, something stirs.

You’ll remember that seemingly immortal Nobu survived a few deaths before getting beheaded by Stick at the end of Daredevil Season 2, and Harold Meachum died at least three times before getting killed for good. Each resurrection corrodes a person’s soul, as we saw with Harold, so we can’t expect the Elektra that rises out of that tomb to be the same person she was before.

The Defenders hits Netflix on August 18.