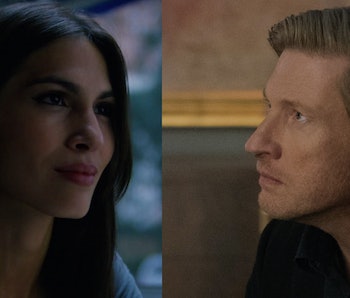 The recently released Iron Fist introduced us to Danny Rand as the final Defender, with the team-up featuring him, Daredevil, Jessica Jones, and Luke Cage, due out later this year. Naturally, The Defenders will tie together many loose threads from the previous Marvel Netflix shows, and we got some big hints as to how in Iron Fist. The biggest hint came in Harold Meachum’s character arc in Iron Fist, which explains Elektra’s upcoming appearance in The Defenders.

Note: Spoilers follow for both Daredevil Season 2 and Iron Fist.

After kicking some serious ass throughout Daredevil Season 2, Elektra met an unfortunate end in the final confrontation against Nobu Yoshioka and a horde of ninjas from the Hand. Much of Season 2’s back-half saw Elektra grappling with her seemingly inhuman and unbridled rage to varying degrees of success. The revelation of her revered position as the Black Sky only further complicated these matters, but her choices in the finale confirmed her heroism.

The very last moments of Daredevil Season 2 depicted the Hand putting her lifeless body in a strange sarcophagus with a few audible heartbeats, and casting announcements have confirmed that Elektra will be back for The Defenders in some capacity. Elektra definitely died, but she will also definitely rise again. The phenomenon will be not only reminiscent of Nobu’s inexplicable revival after dying in the Season 1 fight with Matt and then again in the Season 2 finale, but another main character in Iron Fist that has died three times: Harold Meachum.

Harold makes a deal to work for the Hand in exchange for a mysterious power, spell, or ritual that the Hand uses to bring him back to life after he succumbs to cancer. He reminds characters and viewers time and time again that he did die — but he came back. And he hardly aged in the 15 years that Danny was away. In “Felling Tree with Roots,” Ward stabs his father numerous times with a ceremonial knife and dumps the body in his favorite swamp. Again, Harold is super dead. Two episodes later — in “The Mistress of All Agonies” — Harold wakes up in the swamp, pulls the dagger out of his gut, and wanders around New York City in an incoherent fugue state, slowly regaining his memories and the ability to be a person again, but he goes through some radical changes.

His moods fluctuate rapidly, and his appetites shift. “In all the time I’ve worked for you,” his assistant Kyle remarks, “you’ve never eaten any dairy or sugar!” Yet, Harold tosses his organic smoothie out the car window in favor of a Johnny Walker Black Label nip (sorry Kyle, that’s not bourbon), goes in for fried chicken and mashed potatoes at dinnertime, and during an ice cream feast, he even seizes the opportunity to brain poor Kyle with an ice cream scoop. Yeah, an unfortunate side effect of the revival process is uncontrollable rage. Who does that sound like?

When Ward seeks help from the leader of the Yang Clan, the man tells him a legend about a shepherd with an arrangement with the Hand for immortality. “Each time he came back” from death, the shepherd “was worse,” and one night he roasted two of his own children alive. “They destroy the ones closest to them first.” An ominous bit of foreshadowing, isn’t it?

It’s possible that Elektra has already been resurrected once, which would explain her uncontrollable rage unless, of course, that just comes with being the Black Sky. The franchise has done a notoriously poor job of telling us why the Black Sky is important. As far back as Daredevil Season 1, Stick kills a young boy he calls a “weapon.” It’s said that the Hand worships the Black Sky, with lots of people referring to such people as “it.” Stick’s long-term goal is to use Elektra as a weapon against the Hand, but how or why remains uncertain. Nobu at one point calls the Black Sky the Hand’s “greatest living weapon.” It’s the same kind of language that K’un-Lunians use to describe the Iron Fist, weirdly enough.

When Elektra does come back in The Defenders, she likely won’t be the same person that Matt remembers. Harold went from being a selfish, manipulative egomaniac to a full-blown psychopath, a shift that could only be exacerbated in someone who has the kind of innate wrath that Elektra displayed throughout Daredevil.

Both Daredevil Season 2 and Iron Fist are currently streaming on Netflix, with The Defenders due out later this year.