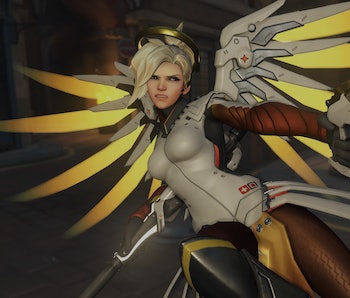 It’s no secret that Blizzard’s latest shooter is a game about character. Every one of Overwatch’s 24 diverse heroes comes with their own unique set of weapons and abilities that function differently than the other 23 heroes, but that doesn’t mean the game lacks an established tier list representing some of its best performers. As with most games of a competitive nature, Overwatch’s top tier of heroes is constantly changing based on player feedback and Blizzard’s own balancing changes, making it difficult to come up with a solid list of the game’s best heroes that will stand the test of time.

That being said, there’s always a meta for Overwatch worth considering when you’re looking for a new hero to master or an old favorite to return to. So, without further ado, here’s our current list of the best heroes in Overwatch as of Competitive Play’s fourth season (with both Quick and Competitive Play taken into consideration, along with solo and team queues).

Widely known as one of the most accessible healers for players in Overwatch, Mercy is a Support hero who can buff a team member’s damage output on command or restore their lost health quickly. She can offer a lot of sustainability when it comes to keeping everyone on the team alive but relies very heavily on her Guardian Angel ability to maneuver around the battlefield and avoid damage. If your team isn’t working with you and actively taking advantage of the buffs Mercy offers, she’s at a distinct disadvantage compared to other Support heroes like Lúcio and Ana, who can handle combat better on their own. That hasn’t stopped her from being a highly mobile healer, though. You just have to work with a team who’s willing to help keep you alive.

Reinhardt is the classic Tank hero at the heart of Overwatch’s current meta game, namely due to his Barrier Field ability, which produces a massive glowing shield that can absorb tons of incoming damage to protect your teammates. Reinhardt has always been an essential pick for the attacking team whenever playing a map involving a Payload, but he’s also grown to excel in other game modes where pushing into chokepoints is necessary for victory. The key with Reinhardt is to learn how to use his Charge ability to eliminate priority targets — such as Mercy or Bastion — while keeping yourself alive and shielding your team when appropriate. Since he’s such a good combination of offensive disruption and defensive damage protection, Reinhardt remains one of Overwatch’s greatest characters if you practice using his kit.

When Ana was first added to Overwatch’s roster back in July 2016, she wasn’t much of a contender compared to the other Support heroes available in the game. After a series of buffs, nerfs, and balancing changes over the past six months, however, Ana has become a unique hero, since her abilities damage enemy players while simultaneously heal the members of her team. While she takes a little bit of practice to get used to, Ana can restore health quicker than most heroes in Overwatch, provided you’re a good shot, and she can completely cut off healing to enemy targets with her Biotic Grenade for a few seconds. She’s much better on PC compared to consoles due to precision being easier to maintain with a mouse and keyboard, but she can serve you well on a console if you play with higher sensitivity.

While many Overwatch players tend to shy away from Zarya in favor or D.Va or Reinhardt due to the responsive nature of her abilities, she’s one of the strongest Tank heroes present in the game if you can manage her cooldowns. Zarya’s abilities scream survivability. She can place a personal shield on herself or project barriers on teammates every few seconds that prevent most forms of damage. These shields may only last a few seconds, but they can be used to save friendly players from bad situations or give a hero like Reaper a small window to use his Ultimate in the middle of a group of enemy players. More importantly, however, they buff your damage as well, turning Zarya’s Particle Cannon into a tool you can use to melt priority targets. She’s a pain to kill without a coordinated effort, and that gives her a top spot in Overwatch.

From the second you first set eyes on Soldier: 76 in the tutorial, it’s relatively easy to immediately dismiss him as a simple run-and-gun hero, built to pull players from more traditional shooters like Call of Duty and Battlefield into the world of Overwatch. While it is true that Soldier: 76 is indeed the standard trooper of Overwatch’s hero roster, he’s a solid offensive hero who can dish out a ton of damage and quickly maneuver around the battlefield if the situation requires it thanks to his Sprint ability. Even though his Biotic Field healing ability doesn’t regenerate much health, the fact that you can use it to heal multiple allies (including yourself) in a pinch will often mean the difference between life and death in a desperate situation. Soldier: 76 is a well-rounded hero with the potential to work in multiple team compositions, which makes him Overwatch’s strongest offensive hero.

There’s plenty of unique character design scattered throughout Overwatch’s current roster, including the cyborg-ninja Genji and hacker extraordinaire Sombra, but none can match the beat that is our top hero pick in Overwatch: Lúcio. From the very beginning of beta, Lúcio has been a hero who can work well in both random and pre-made teams thanks to his excellent mobility and versatility. Like Soldier: 76, Lúcio is capable of dealing damage while simultaneously healing or boosting the speed of his entire team, pushing players back with his Sonic Amplifier when necessary. What’s great about Lúcio is his ability to push through enemy strong points by using his ultimate ability, Sound Barrier, to assist his team, providing them all with a temporary shield that can eat tons of damage. Even though Lúcio has a hard time serving as a dedicated solo healer, he’s easily the top pick for just about any Overwatch team, especially if the map caters to his mobility.