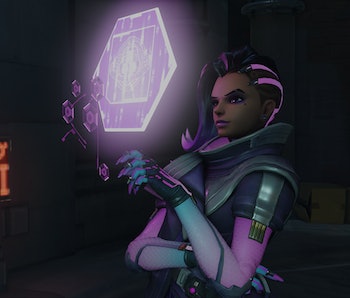 The long-awaited unveiling of the next Overwatch hero named Sombra finally happened during BlizzCon this past weekend. She’s set to be the second hero addition following the release of Ana over the summer, and, as of today, is playable on the Overwatch public test realm (PTR) on PC. That means there are folks playing around with her kit at this very moment.

In the game’s fictional universe, Sombra is one of the world’s most respected hackers in the business of using information to manipulate everyone who holds power across the globe. Before she took up her alias and began working for herself, she was one of the children who was left orphaned following the end of the Omnic Crisis in Mexico. Shortly after, she was taken in by Mexico’s Los Muertos gang where she used her skills with technology to help them with their revolution against the government. There she continued her many conquests until she stumbled on a global conspiracy that had also noticed her, forcing her to go into hiding. Now, years later, she’s re-emerged under the alias of Sombra and allied herself with Talon.

Sombra, the playable character, is equipped with a Machine Pistol, which is a fully automatic weapon that shoots in a short-range spread. Like both Reaper’s Hellfire Shotguns and Tracer’s Pulse Pistols, the Machine Pistol allows Sombra to deal a massive amount of damage at close range to enemy heroes and remains ineffective at longer ranges, but can be utilized to provide some suppressive fire on larger targets given the right circumstances.

When it comes to abilities, Sombra is now one of the most powerful Offensive heroes at your disposal in Overwatch. Her secondary fire is an ability called Hack, which allows you to hack into enemies — temporarily rendering all their abilities useless and interrupting any being used. Like Ana’s Sleep Dart, Hack allows Sombra to shut down devastating ultimate abilities like Roadhog’s Whole Hog and keep healers like Zenyatta locked down for brief periods of time. This ability alone will make her a required pick for most Overwatch teams because of the disruption she’s able to provide.

Her other two main abilities revolve around movement and giving Sombra ways to escape from dangerous situations. The first of the two, the Translocator, allows her to toss out a beacon on the map which will last for 15 seconds. When used, Sombra will instantly teleport to the beacon from wherever she is, even if the beacon is flying through the air. This allows you to use the Translocator to teleport to the top levels of buildings, through enemy defensive lines and even throw yourself through windows if timed properly. Think Reaper’s Shadow Step but a little more instantaneous, closer to Tracer’s Recall.

Sombra’s second main ability is Thermoptic Camo, which allows her to become completely invisible for a short amount of time (roughly six seconds) and gain increased speed for the duration. You won’t be able to use abilities or weapons during Thermoptic Camos duration, but it will get you out of some bad spots relatively quickly. Just keep in mind that you can take damage, and it will disable the camouflage, so make sure to avoid incoming fire when running around with it active.

Sombra’s ultimate ability is easily one of the most powerful in Overwatch, provided you use it at the right time in tandem with a team of friendly players. EMP allows her to discharge a massive electromagnetic energy field around her which destroys enemy barriers and shields while also hacking every opponent caught in the blast. That means you can knock down shields from Zarya and Reinhardt while also disabling their ability to place another, cancel out all enemy ultimates and abilities from being used for a brief time, and hack every enemy emplacement (turrets, health packs, etc.) at the same time with one massive blast. Naturally, this comes at a cost for the sake of balance. Since the EMP originates at Sombra’s location, you’ll have to align yourself perfectly among enemies and have a way to escape. Even then, it feels like an ultimate ability which will get revised in the PTR before hitting live Overwatch servers.

Despite the long, tedious wait tied to the official announcement and release of Sombra on the PTR, she’s another welcome addition to the hero roster. Like Ana, Sombra works to fill a void within the current heroes by providing a unique way of playing an offensive character that feels and plays differently from those currently available. She also provides another effective counter to some of the more powerful characters such as Roadhog, Reaper, and Ana by locking down their abilities with her own. With her amazing toolkit and ultimate, Sombra will most certainly be making her way into Competitive Play team compositions soon enough.

Currently Sombra doesn’t have a scheduled release date on live servers, but you can play her on the PTR for PC.