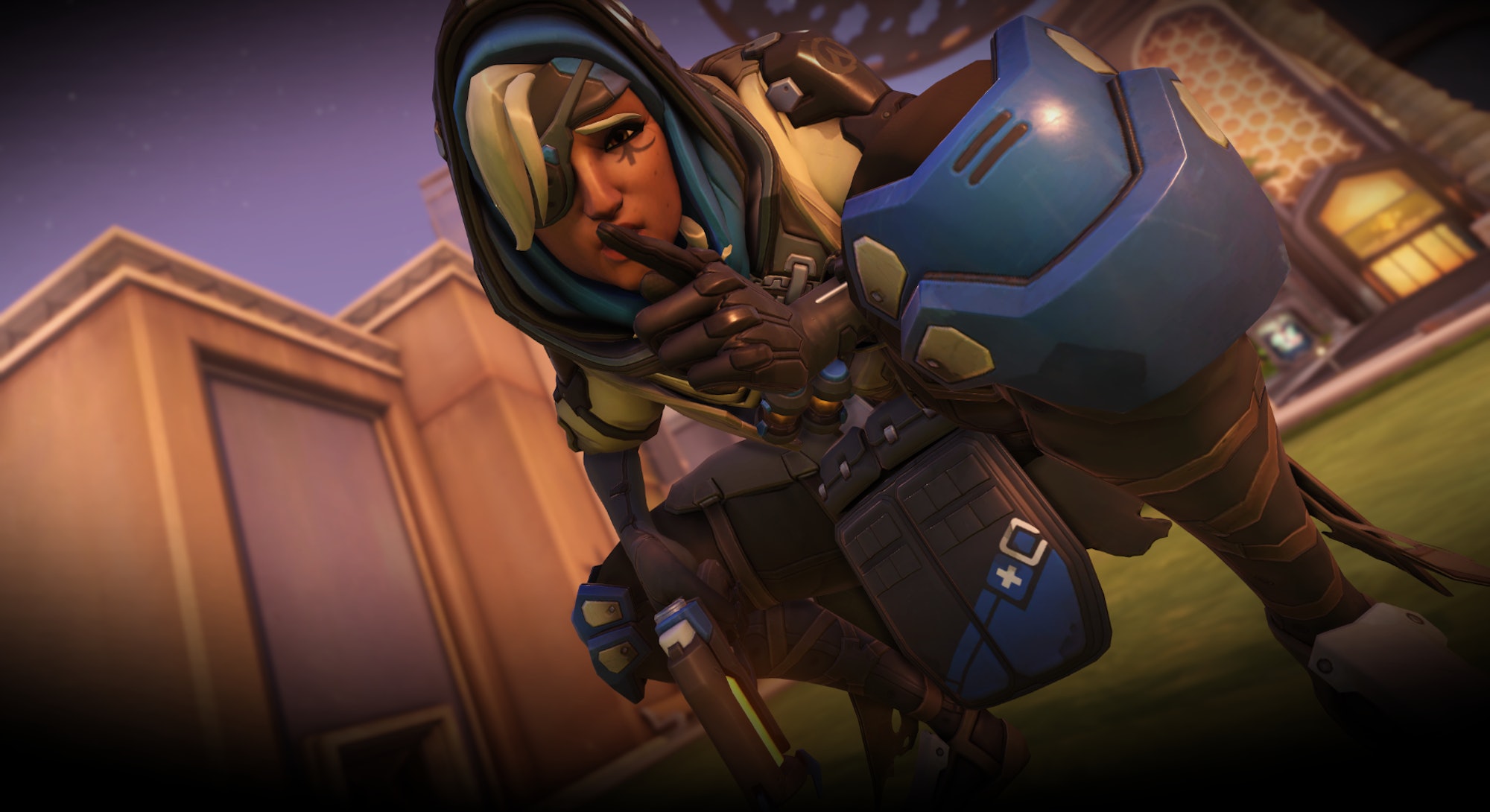 Blizzard’s Overwatch is a game with a diverse cast of 23 heroes and counting. Each of these characters is somehow interconnected with the seemingly endless Overwatch universe, complete with their own backstories and interactions that helped shape them into who they are at the point we play them in-game. But who is best? Which character has the coolest backstory? Well, we’ve gone and figured it out with our definitive ranking of every Overwatch hero available thus far.

(It goes without saying that this is subjective, but here’s a little disclaimer to that effect anyway.)

Mei is easily one of the most adorable characters in Overwatch, namely because of her approach to combat and the various customization items that accompany her character. But no matter how cute her little climate-manipulation drone might be when she pets it like a puppy, nothing can make up for the way she makes players feel in-game when her ultimate ability hits the floor.

An outlaw with a predictable past and fantastic belt buckle, McCree was busted during an operation that resulted in him joining Blackwatch, Overwatch’s covert ops division. Here, he thought he could make amends for his sins by righting the wrongs of the world, until Blackwatch began to turn against Overwatch. Not wanting any part of it, McCree parted ways and resurfaced as a gun for hire, where he now accepts contracts for causes he truly believes in.

Able to bend reality through the manipulation of hard-light constructs, Symmetra is an individual who has the power to create the world into whatever she wants it to be. Involved in the creation of self-sustaining cities for the Vishkar Corporation, she became an agent who upheld the companies will across the world, wondering if her actions serve the greater good.

An intelligent engineer and designer, Torbjörn served as the shorter, more silent version of Tony Stark for the Overwatch universe — creating weapons used by countries around the entire world. As his employers began to ask for more that didn’t serve the best interests of humanity, he parted ways with a deep mistrust of automated intelligence and joined Overwatch until the organization disbanded. Now, he travels around the world determined to stop his weapons from falling into the wrong hands.

Completely committed to her sense of duty, Pharah was a soldier in the Egyptian army who wanted to follow in the footsteps of her mother, Ana. Before she was offered that opportunity, Overwatch was disbanded, and instead she accepted employment at Helix Security International to protect the artificial intelligence research being conducted at the Giza Plateau, where she still dreams of stepping in to make a difference on a global scale.

Growing up in Rio de Janeiro, Lúcio become a DJ to lift the spirits of those around him through music. His performances made him a local legend before the Vishkar Corporation began redeveloping the city and exploiting people. Determined to stop them at all costs, he stole sonic technology from the corporation and used it to drive them out of his city, becoming an iconic symbol for positive social change.

A robotic monk who travels the planet in search of spiritual enlightenment, Zenyatta is a force to be reckoned with capable of great destruction and restoration. Once part of an outcast group of omnic robots who experienced a spiritual awakening, Zenyatta meditated on the meaning of existence until, like humans, he felt he possessed a soul. But instead of seeking social harmony with the humans through becoming a global celebrity, he sought to do so by helping them overcome their personal struggles and seeking inner peace, even if it means he must don a Nutcracker outfit during the holiday season.

Accurately referred to as the Captain America of Overwatch, Soldier: 76 is a disgruntled old soldier looking to reveal the truth behind the organization he once helped lead to glory. While little is known about his origins, many believe him to be part of America’s soldier enhancement program due to his physical augmentations and prowess. He’s the perfect character for every shooter fan coming into Overwatch, and he does a damn good job at clearing areas.

A master assassin and marksman, Hanzo is a member of the Shimada family who stepped up to control the criminal empire when his father died. While he had trained his entire life for this duty, his brother Genji did not, and upon stepping in to remind him of his duty, Hanzo was forced to kill him. This act broke him, causing him to abandon everything he had trained for to wander the world to restore his honor and atone for his past actions.

As somebody who just wanted to be left alone, Roadhog and many of his Australian compatriots were displaced following the Omnic Crisis in a peace settlement with the omnics. Extremely upset over the forced relocation program, he turned against the robots with the Australian Liberation Front and claimed the lands that we once his through violence — which resulted in a twisted, apocalyptic wasteland that molded him into a ruthless killing machine and the ultimate bro who would later become Junkrat’s best friend. I mean, have you seen their Christmas sprays?

A survivor of the transformation of the Australian Outback following the Australian Liberation Front’s violent uprising, Junkrat became a scavenger roaming the wasteland for metal and components he could use for himself. After being exposed to radiation, he slowly started to go insane until he found a secret so great it forced him to hire Roadhog as his own personal bodyguard. Now, he roams the world leaving nothing but havoc in his wake.

Known for her hacking abilities, Sombra controls those in power through the manipulation of secrets and information. Taken in by Mexico’s Los Muertos gang, she aided in the revolution against the government before stumbling onto a global conspiracy that forced her into hiding. Now, after a long and tedious ARG, she’s back as a member of Talon with a glitchy look and enough boops for everyone she comes up against.

One of the world’s strongest women, Zarya was born in a small village on the front lines of the Omnic Crisis where the Russian forces defeated the robots. But even in victory, it left the region devastated in the wake of conflict. Growing up, she helped children and swore she would gain the strength to protect her people. She trained into one of the most respected national athletes, but threw all of it away when the omnics attacked her village again to become the cannon-toting warrior her village needed to defend itself.

Genetically engineered by humanity to test the effects of prolonged habitation in space, Winston displayed such rapid brain development he was taken under the wing of Dr. Harold Winston. Harold taught him science and inspired him to seek more with his life before being killed in a gorilla uprising that forced Winston to escape to Earth on a rocket of his own design. Now, he fights with the name of his caretaker, defending the world with his scientific designs and inventions.

The perfect assassin, Widowmaker is a ruthless killer with a troubled past due to her affiliation with one of Overwatch’s agents. Kidnapped by Talon, one of Overwatch’s main enemies, Widowmaker was reprogrammed as a sleeper agent and forced to kill her husband while he was unconscious. Now, she serves as the Black Widow of Overwatch, hunting down targets when the map rotation favors her long-range capabilities and a better hero isn’t required by team composition.

The guardian angel of Overwatch, Mercy is a dedicated healer and a firm advocate for peace between the organizations of the world. Not only did she pioneer a breakthrough in the field of applied nanobiology that improved the treatment of life-threatening illnesses and injuries, but she designed her own armored suit that allowed her to keep her allies alive on the front lines — which she still does today on the field as one of the game’s support characters.

Genji is best known in Overwatch for taking the definition of cyborg ninja to a whole new level. At a young age, Genji rejected his family responsibilities to a level that nearly resulted in his death at the hands of his brother Hanzo before being rescued by Dr. Angela Ziegler (Mercy). She and the rest of Overwatch’s medical team rebuilt his entire body into a weapon, which he struggled coming to terms with until meeting and training under Zenyatta. Now, he’s a man on a mission and one who we all know to be wary of in-game.

The youngest person to ever be inducted into Overwatch’s experimental flight program, Tracer was presumed dead following a test flight of a teleporting fighter called the Slipstream. She later appeared with her molecules desynchronized from the flow of time but was saved by Winston who designed a chronal accelerator that allowed her to control her body’s relationship to time while anchoring her in the present. Now, she’s a teleporting gnat that may annoy many of us on the battlefield, but she’s one of Overwatch’s’s most recognizable characters on the field thanks to her fantastic accent and wonderful wit.

Reaper, who we now know is Gabriel Reyes, served in the United States military before being recruited into Overwatch alongside his friend Jack Morrison. Following the Omnic Crisis and disbanding of Overwatch, he ended up going his own way after a series of disagreements that resulted in his death when Overwatch’s Swiss headquarters was destroyed. Now, he’s resurfaced as the Reaper, who’s cells simultaneous decay and regenerate at an accelerated rate – allowing him to shift into a wraith that hunts on the battlefield at will.

One of the many South Koreans who rose to protect her homeland, D.Va is a 19-year-old professional gamer who turned her competitive attitude towards defense of her county when the omnics attacked. Fighting as part of the mechanized armored drone unit (MEKA for short), D.Va fearlessly continues to charge into combat while live-streaming all of her combat operations to thousands of adoring fans who watch from around the globe.

Living by the knightly codes of valor, justice, and courage, Reinhardt is a German soldier who has no problem speaking his mind while cutting through threats with his massive, rocket-powered hammer. Met with mandatory retirement after serving into his late ‘50s, this armor-clad front-line warrior is one of the deadliest and most resilient heroes in Overwatch. More importantly, he’s pretty great at keeping you and your team alive.

Once a front-line combat unit for the omnic forces during the Omnic Crisis, Bastion is the only known unit to have survived even though it lost most of its combat programming. It’s now an innocent robot with a troubled past that has its actions overwritten by combat protocols whenever it senses danger. This has led to many troubled encounters with the few humans it meets, but that hasnt stopped Bastion from wandering around in nature looking for a purpose, and that’s something you can’t help but love.

One of the founding members of Overwatch, Ana Amari is easily one of the most badass characters we’ve seen thus far in the game’s roster. Added shortly after Overwatch released, Ana is an elite sniper who fought throughout the entire Omnic Crisis to protect those she loved, refusing to step away from combat missions well into her 50s. Now, she’s out fighting again to keep her closest allies safe, doing so at age 60 and armed with a sniper rifle and wide array of healing abilities that make her one of the most formidable heroes on the field.