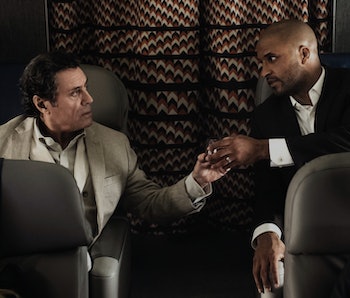 Neil Gaiman’s magnum opus, American Gods, has a dedicated cult following — much like Gaiman himself. It’s hardly the kind of story where readers will fail to notice the changes Bryan Fuller and Michael Green’s television adaptation has made. Luckily, the tweaks and adjustments are for the better. The novel was written over a decade ago, and the shape of America has changed considerably. Here’s what you can expect to look different onscreen:

In the book, protagonist Shadow Moon is racially ambiguous. At times he passes for white; at times, he’s questioned about whether he’s got Spanish or “Gypsy” or African ancestry. His personality is flat; he doesn’t show much outward emotion to events like his wife’s death or to extraordinary supernatural occurrences.

Onscreen, the character is played by Ricky Whittle, who still appears racially ambiguous, though he embraces a Black identity more overtly. In one scene, he makes a reference to “strange fruit,” though in the book he engages with the political implications of being lynched only passively. Visually, the show often anchors him in imagery with roots in African American history. To say exactly what would be to spoil, but think Jim Crow and the prison industrial complex. The American Gods TV show is more direct about America’s ugly relationship with race.

Personality-wise, Whittle’s Shadow is still the strong silent type, but he’s far more emotive. This works because if he played him the way the novel portrays him, he’d be borderline catatonic. In a recent interview, Whittle said about this personality shift, “He’s very stoic, very blase about everything. We needed to move away from that and make him more adaptable to TV. You don’t want to watch a man think [out loud] every week. We didn’t want to do voice-overs.”

American Gods concerns a brewing war between old gods from mythology and the new “gods” America worships like Technology and Media. Both are areas that have changed dramatically since the book came out, and the show has adjusted to reflect this. In the book, Technical Boy — who embodies the internet — looks like Comic Book Guy in The Simpsons. He’s pale and overweight and acne-ridden.

The show, on the other hand, has made him look like a modern Instagram star. He has a trendy Justin Bieber-esque haircut, he vapes, and he uses VR googles. About this update, Bryan Fuller has said, “The book sort of describes the quintessential overweight hacker that Donald Trump was shielding the Russians with. Now technology is much more socialized than it was 15 years ago. We see the integration of technology and all these other industries, particularly fashion. So we felt like it’d be an interesting evolution of the character if he was as fashion forward as he was tech savvy.”

The New Gods aren’t the only ones with updates. Sex goddess Bilquis, Spring goddess Easter, Leprechaun Mad Sweeney, and African trickster god Anansi are all fun and colorful parts of the novel — but they don’t exactly dominate the story. Each appears in just a few scant scenes. The show has expanded their roles and emphasized their importance, making each of them feel more meaningful to the narrative than just a bit part. In particular, expanding Anansi’s role makes for a show-stopping, politically relevant firebrand of a cold open for the second episode.

Shadow’s dead wife Laura pops up periodically in the book to help Shadow out of sticky situations and commit a murder or ten. Like Mad Sweeney and Bilquis, she’s fun and memorable but her role is small. The show expands upon it by bringing the audience further into her pre- and post-death experiences and dedicating its entire fourth episode to her life and death. This proves to be an excellent move.