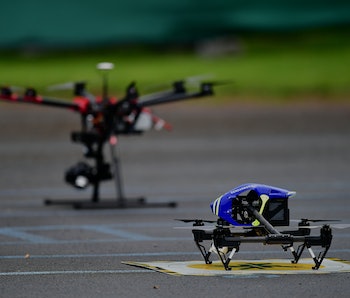 Police officers, the stereotype goes, love coffee, donuts, and now perhaps drones. A new study from Bard College finds that an unprecedented number of law enforcement and emergency response departments purchased drones in 2016, a trend that doesn’t show any signs of slowing. The report lays out startling figures on drone purchases by police around the country, tracking the dramatic rise in police drone usage over the past few years.

According to the study, published April 6, all but seven states have at least one UAV operated by police, sheriffs, emergency response, or fire departments. Without ruling out the possibility that it missed a significant number of drone purchases, the report says that “at least 347 state and local [agencies] in the U.S. have acquired drones.” In 2016, more of the departments studied acquired drones than in all previous years, combined.

The federal government is also training local cops to use drones.

Local law enforcement purchases the most drones by far. Local municipal police departments and fire departments comprise 28 and 20 percent of drone purchases, respectively, and sheriff’s offices account for a whopping 35 percent. The researchers note that the law enforcement organizations typically opt for consumer-level drones rather than more expensive, professional level surveillance drones. This is likely due to cost, more than anything else, but it also allows police drones to “blend in” among the ever-growing air-traffic population over densely populated areas. With the FAA beginning to enforce more stringent no-fly zones over cities, however, lone cop-drones sailing through restricted airspace might eventually start to stick out.

Drones are still subject to the same restrictions in use by police as any other technology, meaning that they’re only being used for surveillance and other non-violent uses. Last year, police in Dallas famously used a non-lethal drone for lethal purposes by strapping an explosive to its back. That was the first ever use of a lethal robot by police — but there are rumblings indicating that American law enforcement may be gearing up for a flurry of similar uses, in the future.

In this parlance, there’s little difference between aerial drones and ground-based robots, though aerial drones are much more likely to be automated, at this point. The same researchers who produced this study also previously documented the police acquisition of ground-based drones like the one used in the Dallas killing.

That said, drones can be used by police much more widely than just to attack or even follow suspects. Some police departments are turning to drones to try to reduce traffic fatalities, others for search and rescue.

Check the study to see if your local department is on there — but, spoilers, it almost certainly is.