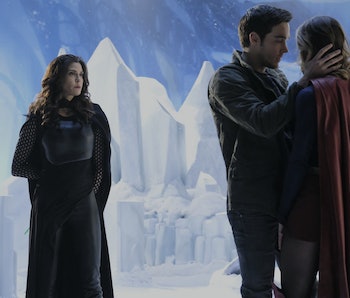 When we last left Kara and Mon-El on Supergirl, Kara had dumped her Daxamite lover on account of his big, big lie. Well, turns out they totally made up on during the musical crossover with The Flash, in case you missed it. However, there’s still a force trying to keep the two apart, and it’s terrifyingly intense: Mon-El’s mom.

See, even though it seemed like things were cool with Mon-El’s parents — Daxamite royalty who wanted their long-lost son to lead the species’ rebuilding process — turns out Mom-El was furious. The character, Rhea, is played by former Lois Lane actress Terri Hatcher, and Monday’s Kevin Smith-directed episode solidified her villain status. Some powerful alien has placed a bounty on Kara’s head, and Mon-El naturally suspects his parents. However, when he meets them at the bar he works at, they deny doing any such thing. It seems like a legitimate, heartfelt denial, but after apprehending a mind-controlling bounty hunter, the DEO learns that the Daxamites were behind it.

Or at least, one of them was. Kara wants to meet with her possibly murderous potential future in-laws, and it doesn’t go great. Rhea nearly kills her with some badass Kryptonite sais, prompting Mon-El to agree to peacefully go with his parents so they don’t kill his girlfriend.

But, even though the secretly alien president (played by a former Wonder Woman actress Lynda Carter) tells the DEO not to get involved, the gang infiltrates the Daxamite ship to rescue Mon-El. His dad, Lar Gand, had no idea what his wife was up to, and after a pretty solid fight scene, sadly allows his son to go free and be happy on Earth.

Well, Rhea is super not down with this idea. In the hour’s closing moments, she coolly murders her husband for his betrayal, and ends the episode by looking out at Earth through her spaceship window and promising that she’ll retrieve her son and finish Supergirl.

Supergirl’s season finale isn’t for several weeks, but just in case Rhea hasn’t been dealt with by the time it’s over, Kara and Mon-El might want to think long and hard about what to do for Mother’s Day once it comes around during the offseason.