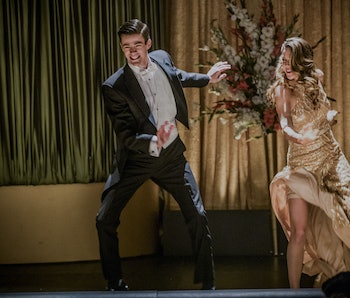 While trapped in Music Meister’s crazy alternate universe, Kara and Barry are forced to perform an entire musical number about how they definitely do not want to make out. “Super Friends,” written by Crazy Ex-Girlfriend’s Rachel Bloom, tries its best to alleviate any tension between the two superheroes. The truth, after all, is that they’re both spoken for.

Music Meister, played by Glee veteran Darren Criss — Melissa Benoist and Grant Gustin are both former Glee actors as well — says he’s trying to teach the superheroes a lesson by forcing them into song. While Kara and Barry try to navigate his trap, singing and dancing with alternate versions of familiar characters from their Earths, they chat quite a bit about their romantic frustrations. When a musical version of Iris says she’s in love with musical Mon-El, Barry and Kara realize they’re been screwing up their real-world relationships for no reason.

It’s a stunningly simple way for both shows to move beyond their hackneyed romantic “drama,” and force Barry and Kara back into Iris and Mon-El’s arms.

In addition to Barry and Kara’s ode to the friendzone, the song list in The Flash’s includes an opening cover of “Put a Little Love In Your Heart,” “More I Cannot Wish You” from the cast’s Broadway veterans, and “Runnin’ Home to You” from La La Land’s Pasek and Paul.

That last one is a true tearjerker, as Barry sings it to Iris in their shared living room, despite them not being stuck in Music Meister’s trap anymore. “I’m meant to be,” Barry sings, “wherever you are next to me.” He slips into the falsetto Gustin once got to show off on Glee, and Iris is helpless to his charms.

The Flash airs Tuesday nights on The CW at 8 p.m. EST.