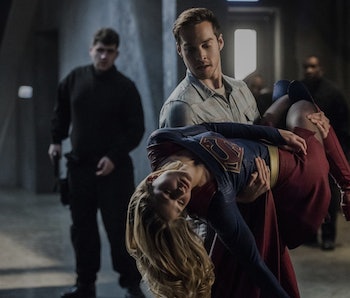 Kara and Mon-El’s relationship on Supergirl has always been an interesting wrinkle in the show’s proud feminism. The now-confirmed Daxamite prince is a liar, yes, but he’s also a boorish bro, who on more than one occasion has trampled over our capable heroine. And yet, she loved him, and it seemed like he was willing to learn and improve himself despite his privileged background. He — and their romance — was just flawed enough that it would’ve been cheap if Supergirl had let them kiss and make up. The reality, though, of Mon-El’s parental visit, was a lot more complicated, and the show is better for it.

So, yes, Mon-El is the prince of Daxam, and his father and mother (played by former Lois Lane actress Teri Hatcher) weren’t quite the terrifying invasion force that we all might’ve feared them to be, given that even the Dominators bowed down to the royal family. They just wanted their son back to lead a rejuvenation effort for their destroyed homeworld.

While they ended up being surprisingly cool (or at least as cool as your significant other’s parents can be on first meeting), what wasn’t cool was Mon-El’s lying. That, combined with his implicit participation in Daxam’s horrible leadership, is a lot for Kara to take in.

After watching Winn forgive his alien girlfriend Lyra for framing him for art theft, it seemed liked Supergirl was getting the audience ready for Kara to forgive Mon-El too when he made an earnest, heartfelt appeal to her in her apartment. Except, as Kara rightfully says, she deserves better. She dumps Mon-El for his deception, even though it’s clear that she’s really hurting.

Kara deserves better, and Mon-El deserved to be dumped, but he doesn’t deserve to go back to the old Daxamite life of privilege that Kara helped make him realize he hated. Mon-El tells his parents off and stays on Earth. He can be a bit douchey, sure, but he’s not a villain. But being a “nice guy” doesn’t mean that he should get Kara’s forgiveness. Maybe they’ll revisit things in the future, but Supergirl should be praised for letting Mon-El’s betrayal actually be a big deal while still treating him as a flawed (but eminently redeemable) character.

In the short-term, though, Kara’s got a whole new suitor to deal with — a musical magician who has kidnapped her mind and expects her to perform some, uh Flash-y show tunes. That should take her mind off of the breakup for a bit.