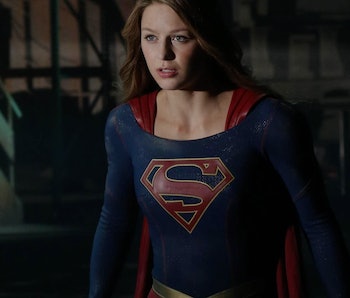 No show is perfect, and Supergirl definitely has its issues — but, damn, does it try. Supergirl may only be in its second season, but the show is already miles ahead of its superhero competition as far as cultural relevance and an ability to stick to a light-hearted tone while exploring severely serious subjects. The show rarely feels bogged down, and the characters are interesting and often subvert expectations and stereotypes.

This list tackles race, immigration, sexuality, and gender: four of the topics Supergirl bases itself around and four of the topics it explores on the regular. While the show isn’t as inclusive as it could be — there are far fewer non-white people than there could be, and there’s the whole issue of the only two queer-identifying characters on the show being a couple — it still puts more of an active effort into being socially aware than most shows on television do.

Here’s 6 reasons Supergirl is the most relevant show on television:

Kara Danvers is her city’s protector, Cat Grant founded a worldwide media company, Alex Danvers is the top agent at the DEO, and Lena Luthor runs L-Corp. Even a majority of the villains in Supergirl are women. The numbers on women-owned TV shows are certainly larger than they have been in the past, but Supergirl blows them all out of the water. And it does it in the most kick-ass way possible, making Supergirl as much an action star as she is a relatable figure.

5. It’s Probably the Most Accurate Portrayal of Journalism on TV

Season 2 of Supergirl saw Kara becoming a reporter at CatCo after having been promoted from Cat Grant’s personal assistant. She finds herself in the evil clutches of one of the most intimidating people out there: a newspaper editor. Editor-in-Chief Snapper Carr (Ian Gomez) is a hardened newsman who’s been thrust into the head position at CatCo Magazine, and the poor dude is forced to deal with Kara’s inability to be an actual journalist.

While Supergirl usually casts Snapper as a cranky, hard-nosed authority figure standing in the way of Kara’s bleeding heart idealism, he’s a much-needed voice of reason. He insists on good journalism: fact-checking, proper sourcing, and responsible reporting — not just a fun idea and the pluckiness to back it up. The qualities that probably make Snapper so frustrating for people who just want to see Kara blindly succeed — “let her live, damn it!” — are what make him so important.

4. Relationship Between a Human and an Alien

Winn’s been sans a legitimate love interest since Supergirl dropped the short-lived angst between him and Kara. The introduction of Lyra — the sexy, badass alien girl from the planet Starhaven, who’s light years outside sweet Winn’s league, put him back in the show’s romantic game. While their relationship is still in its early stages and seems to mostly revolve around sex, they’ve had some truly heartwarming moments.

Trouble might be a-brewing though, as Lyra is expected to join Team Guardian and disagree with the way things are run. “Winn, James, and Lyra have a really funny story in 18 too, where the three of them try crime fighting as a trio, which doesn’t necessarily go well,” executive producer Andrew Kreisberg told Entertainment Weekly. “She kind of becomes the Yoko of the team.”

Sure, Alex and Maggie have had their problems just like any couple, but that’s just it. For the most part, Supergirl doesn’t play into the all-too-common “Sad Gays” trope. There’s also a thankful lack of the “Bury Your Gays” trope so far, which would result in, well, death. There’s always the chance that the writers could choose to kill off Maggie for the sake of drama, but that feels unlikely.

Alex and Maggie are the healthiest, most supportive couple on the show (once they got past their initial problems and Alex really began working through her identity crisis), and hopefully that will continue.

2. The Primary Problem-Solver Is an Alien Who Takes the Form of a Black Man

The entire Supergirl viewership is in agreement that J’onn J’onzz is the best character on the show, right? The man’s a legend: a leader, a protector, and a father figure to boot. The last surviving member of the Green Martian race came to Earth and took the form of a black man, only opening himself up to more potential harm and prejudice. J’onn notes this a couple of times throughout the series, but he never lets it hold him down.

1. Discussion of the Immigration Rights of Literal Aliens

Supergirl turns the immigration discussion into one that’s relevant for its own plot — the immigrants being literal aliens from different planets — but the show still has the discussion. Project Cadmus spends its days hunting down illegal aliens, ransacking their gathering places, like the dive bar the Supergirl gang hangs out at, and throwing them into slavery and fight rings alike.

The debate about the rights of aliens to occupy a place on Earth in Supergirl feels alarmingly similar to recent IRL political debates about immigration rights in the United States, something that is undoubtedly intentional.

More like this
Entertainment
Jan. 25, 2023
The MCU could bring back a hero from its most underrated TV show
By Dais Johnston
Entertainment
Jan. 17, 2023
The Flash's final season will give the Arrowverse the sendoff it deserves
By Eric Francisco
Entertainment
Jan. 13, 2023
Mike Colter would "entertain" the idea of coming back to Luke Cage
By Hoai-Tran Bui
LEARN SOMETHING NEW EVERY DAY.
Related Tags
Share: