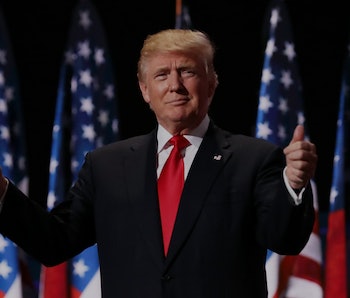 President Donald Trump’s 2018 budget proposal is now available to the public. It’s characteristic of Trump’s promises to downsize the federal government, with a number of cuts to administrative agencies. However, the section detailing plans for funding NASA hints at a potentially positive future for the organization — or at the very least, one in which the agency can score at least a few wins. Besides the military, it’s actually one of the few things he may spend more on than the Obama administration, in the view of certain agency objectives and programs.

Here are five positive things the NASA budget could accomplish:

The budget includes funding to the tune of $624 million for “eventual over-land commercial supersonic flights and safer, more efficient air travel with a strong program of aeronautics research.” That kind of R&D funding could potentially see a return of ultra-fast flights like the Concorde, only without some of the critical flaws that doomed the aircraft last time around. Anything that can cut trans-Atlantic travel times in half is probably a good thing.

The budget also seeks to “reinvigorate robotic exploration of the solar system by providing $1.9 billion for the agency’s Planetary Science program, including funding for a mission to repeatedly fly by Jupiter’s icy ocean moon Europa.” That mission’s goal is finding life, or at least signs of it, on Jupiter’s moon — and invaluable purpose, if realized. Also included is funding for the upcoming Mars 2020 rover, which will succeed Curiosity and make a bigger investigative push to look for signs of habitability and life in the red planet’s ancient past.

It’s hidden in a single line, but the budget also provides support for “initiatives that use smaller, less expensive satellites to advance science in a cost-effective manner.” If that sounds vague and noncommittal, fear not. Teeny-tiny satellites, like Cubesats, are already being designed and launched into space for various studies and experiments.

Also in the vein of new satellites are financial plans to “restructure a duplicative robotic satellite refueling demonstration mission to reduce its cost and better position it to support a nascent commercial satellite servicing industry, resulting in a savings of $88 million.” In English, this means better repair and refueling services for satellites through novel robotics.

Resources are also set to be dedicated to strengthening “NASA’s cybersecurity capabilities, safeguarding critical systems and data.” In an era of public and high-profile security breaches, it’s an important step. If NASA was to fall victim to a major attack, all of America’s extraterrestrial interests could be put in jeopardy.

5. One step closer to Mars

In perhaps the most exciting allocation of all, Trump’s budget “provides $3.7 billion for continued development of the Orion crew vehicle, Space Launch System, and associated ground system, to send American astronauts on deep-space missions.” The SLS will be the most powerful rocket on the planet, and is set for a test launch in 2018. Combined with the Orion capsule, the renewed support is a sign the Trump administration plans to continue supporting a Mars-bound human mission. It’s good news for those of us excited by the next chapter of space flight.

Considered broadly, these budgetary moves make a lot of sense. Trump’s administration has been no friend to science in many areas, but space travel is an outlier. Historically, American space exploration — and the competition therein with the Soviet Union — was a key source of national pride and a crucial characteristic of the “great America” to which Trump says he wants to return. It’s only fitting that NASA would be treated well under a conservative administration. Is it ultimately a case of cognitive dissonance? Very likely. But it’s one that might nevertheless lead to places we’ve never been before.