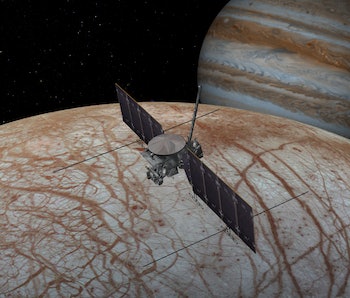 On Thursday, NASA announced that a flyby mission to Jupiter’s moon Europa, planned for the 2020s, will be called Europa Clipper and it will look for signs of habitability and life on the moon.

Right now, scientists are working with limited data, because most of the information from the Galileo probe focused on Jupiter itself. But NASA is moving forward with the mission to Europa because of the compelling possibility of finding extraterrestrial life. Europa has an icy crust, but underneath, it’s an ocean world. And water means one thing: the potential for alien life to make a home for itself.

After the six-ton Clipper spacecraft is launched, it will reach Jupiter in 2.7 years. Once it reaches its destination, it will sail past Europa every two weeks and make 40 to 45 flybys.

During this time, it plans to find the best place on Europa for finding life in a future landing mission, whether it’s near plumes, fresh ice, or somewhere else. It will also take high-resolution images of the icy surface, investigate the composition and structure of Europa’s interior and shell, and test the technology needed for the lander.

Here are three things you need to know about upcoming missions to Europa.

Why do scientists suspect there might be life on Europa?

On the outside, Europa looks like a deserted planet, prone to deadly radiation from Jupiter.

But beneath the crust, there’s an ocean scientists believe is over 60 miles deep, which is exactly where the Clipper will search for signs of life. Scientists believe that Europa has twice as much water than Earth, and the radiation on the surface may actually benefit life in the oceans.

The age of Europa’s surface varies between 10 million and 100 million years old, which means periodically some parts of the ice shell are brought into the ocean, delivering oxygen into the water.

With oxygen, energy, and water, Europa might just have aquatic life swimming beneath its icy shell.

What’s going to happen on the upcoming mission to Europa?

So far, the Clipper team already selected ten instruments for this mission and tested some spacecraft components.

The Clipper mission recently entered Phase B, or its preliminary design phase, where the team will continue testing components, do preliminary design, select prototype hardware elements for scientific instruments, and start building and testing spacecraft subassemblies.

In February, NASA received a report for a possible landing mission to Europa, which has been in the works since June 2016. In the landing mission, a probe will search for evidence of alien life on Europa, assess its habitability, and characterize the surface and subsurface for future explorations to this moon and its ocean.

NASA has also made progress in the problem of planetary protection, or the concern that microbes from Earth can contaminate Europa’s ecosystem. To solve this problem, before launching, a lander will bake at extremely high temperatures to kill contaminants, and when its work on Europa is done, it will self-destruct.

Clipper will cost $2.7 billion, and this doesn’t include the launch vehicle and some other vehicles. In total, it will likely cost $3 to $4 billion, and the landing mission will cost about the same. In total, these missions to Europa will cost NASA as much as $8 billion.

It’s a gamble whether we’ll find life there, but a lander has higher chances of finding life because it can test the ice.

What would a lander do on Europa?

The lander would burrow 10 cm below Europa’s surface to search for signs of life. The lander features a sampling arm with a “cutter,” or a small rotary saw. Since Europa is so cold, the ice is harder than granite, but engineers have tested 35 types of blades on 25 different surfaces to find the best tool for cutting ice. In total, the lander would collect five samples.

Besides the cutter, the lander would also bring a microscope capable of seeing cells, as well as spectrometers to corroborate evidence of life. In August, there will be a call for proposal submissions to build instruments, and they’ll be selected in May 2018.

Besides searching for life, the lander would also analyze the habitability of the oceans, such as the water’s chemistry and the ice shell’s thickness, as well as study Europa’s physical features for future expeditions.

The surface mission should last 20 days, as the batteries have a capacity of 45kWh. This is the same amount of energy as a MacBook Pro operating at full capacity for a straight month.

More like this
Science
November 23, 2022
NASA Perseverance rover's Mars landing site may have been too harsh for ancient life
By Kiona Smith
Science
November 18, 2022
Scientists figured out how to solve an ancient Martian mystery — with rocks found on Earth
By Jeff Nagle
Science
November 21, 2022
NASA's Artemis I Orion spacecraft is on track to travel farther than any Apollo mission
By Doris Elín Urrutia
Related Tags
Share: