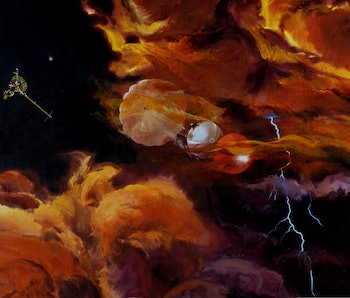 The year was 1995. Hillary Clinton’s husband was prepping to run for reelection. Coolio’s ‘Gangsta’s Paradise’ was song of the year. Toy Story was blowing minds. And on December 7, NASA’s Galileo spacecraft finally completed a six-year journey and arrived at the doorstep of Jupiter’s atmosphere, becoming the first manmade spacecraft to orbit the gas giant.

Once there, Galileo let loose a 750-pound probe that fell toward the planet’s core, traveling at over 106,000 miles per hour, behind a heat shield that hit nearly 28,000 degrees Fahrenheit. The probe descended into the top layers of the Jovian atmosphere for about 58 minutes, supplying a glut worth of data on the local weather and climate of the planet, before being destroyed.

Here’s the late Peter Jennings describing the incredible feat on the evening news, which used to be a thing, and passing it off to a young Neil deGrasse Tyson:

That broadcast was very much the abridged version. Carl Sagan’s Galileo took things about 18 steps further:

At the time, the Galileo mission had been one of the most difficult unmanned missions NASA had undertaken. To build something capable of making the 365 million mile journey to Jupiter — while withstanding the harmful effects of cosmic radiation — and itself launch another probe into the atmosphere of the planet — was, and remains, an insane accomplishment.

For perspective: Jupiter boasts a gravity that’s 230 times that of Earth’s. In order to test whether the materials and instruments would survive long enough to collect enough data, NASA tested initial prototypes in a heat load simulation comparable to a thermonuclear fireball. The probe itself was fitted with an array of six different instruments, measuring temperatures, pressures, gaseous elements, cloud location and particle composition, and light and radio emissions associated with lightning and energy events.

Though the probe’s launch and demise were perhaps the coolest part of Galileo’s mission, the spacecraft was an incredibly important part of helping NASA and the rest of the world’s space scientists ramp up their efforts to study other planets and objects in the solar system. Galileo’s data would suggest there was an ocean under the surface of Jupiter’s moon, Europa, and find a magnetic field on Ganymede. The spacecraft made the first observation of ammonia clouds on another planet’s atmosphere. All of this would help clarify the wide variety of characteristics that defined planetary objects within and outside the solar system — and help shed light on what we might want to look for when identifying potentially habitable exoplanets.

The mission finally ended in 2003 with an intentional crash into Jupiter itself, to prevent the possibility of contaminating other moons or planets with Earth-borne bacteria that had possibly clung to and survived the trip since 1989. The crash caused a particularly strange concern that because Galileo had plutonium on board, NASA was planning to create a fission bomb reaction that could turn Jupiter into a star. This was insane and completely wrong, but that didn’t stop alarmists from believing NASA was being run by incompetent mad scientists who were about to doom all of humanity.

Spoiler: It all turned out fine.

More like this
Science
7 hours ago
How the Webb Telescope is Rewriting What We Know About the Early Universe, One Galaxy at a Time
By Doris Elín Urrutia
Science
Feb. 4, 2023
Astronomers May Be on the Cusp of a “Potentially Revolutionary” Cosmological Breakthrough
By Universe Today and Matt Williams
Science
Feb. 2, 2023
Exclusive: NASA Explains How the Voyager Missions Could Live Until 2035
By Kiona Smith
LEARN SOMETHING NEW EVERY DAY.
Related Tags
Share: