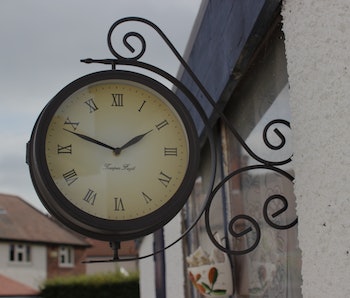 Twice a year, we try to remember whether it’s time to spring forward or fall back. Well, tonight is the night when millions of people wonder, “When does the time change?” Even if you find out what time to change your clock, though, it can be confusing. So here’s the clearest way we can say it: One minute after 1:59 a.m. tonight it will be 3 a.m.

That means on Sunday, the sun will rise and set one hour later than it did today. And beyond wondering when the time will change, you may be wondering why it changes. After all, nobody wants to lose an hour of sleep.

The idea started out as a practical one. Benjamin Franklin proposed it in the 18th century as a way for Parisians to save money on candles. “Early to bed, and early to rise, makes a man healthy, wealthy and wise,” Franklin was fond of saying. In short, daylight saving time is meant to help people make the most of daylight hours. When the seasons change, daylight hours shift, so if you get up earlier, you can make better use of the natural light. The idea returned in the years before the turn of the 20th century. Various papers were published in the late 1800s and then again in the early 1900s. The concept took off on a city level, then World War I’s energy use caused countries to adopt it as a way to save coal. The Seventies energy crisis caused countries to take it up again. This list of daylight saving time by country serves as a fascinating history lesson.

Daylight saving time became United States law in 1966 under Lyndon B. Johnson, requiring states to have consistent policies to avoid weird patchworks of cities with different times. Hawaii still doesn’t observe daylight saving time and neither does most of Arizona.

But while it may have helped people use fewer candles and less lamp oil back in the day, many people argue that there’s no good reason for it to still exist in 2017. Some have even advocated for abolishing time zones altogether in favor of universal time.

Admittedly, the increased evening daylight hours may give you more opportunity to be active after work, but enough people are using energy around the clock that it hasn’t been shown to make an appreciable difference in power consumption.

More like this
Mind and Body
5.10.2022 10:31 AM
Studies linking nature to better mental health focus on wealthy nations — here's why that's a huge problem
By Nick Keppler
Science
5.9.2022 10:00 AM
Here’s the optimal amount of sleep for good mental health, according to a new study
By Barbara Jacquelyn Sahakian, Christelle Langley, Jianfeng Feng and Wei Cheng
Mind and Body
5.17.2022 11:00 AM
First-of-its-kind study reveals transgender children are extremely unlikely to retransition
By Nick Keppler
Related Tags
Share: