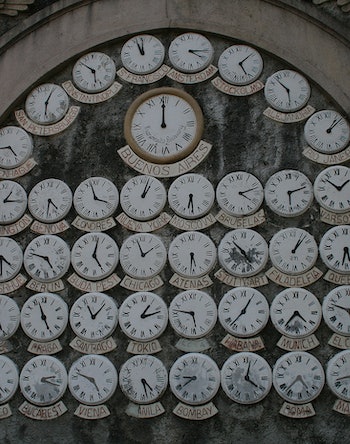 Daylight saving time is a nightmare. Sure, long summer evenings are heavenly, but time changes wreak havoc on our circadian rhythms and cross-border business.

Which brings us to this radical conclusion: Let’s not just end DST, let’s end time zones altogether. A universal time system already exists, and lots of industries already use it; the world is becoming more global, and it’s time our clocks did, too.

The fact that daylight saving time is the worst is not a tough one to argue. The loss of an hour of sleep in springtime is implicated in an increase in fatal traffic accidents, and the energy savings touted by governments usually fail to materialize. A U.S. Department of Energy report found that the extension of daylight-saving time by a month in 2007 saved 0.03 percent in annual energy usage.

Daylight saving time would be bad enough if everyone observed it at the same time. Even the states can’t all agree. While most of the country does observe DST, Hawaii and Arizona do not … unless you’re on Navajo tribal lands in Arizona, where it is observed. If you do business between Los Angeles and Phoenix, say, you’ll have to remember that they’re on the same time part of the year, and an hour apart the rest.

So, who actually enjoys this biannual clock catastrophe? It’s certainly not the farmers. Despite the persistence of the myth that the clocks change for their benefit, the agricultural industry has consistently been one of the most vocal opponents of the time change. Farmers, after all, get up at dawn despite what the clocks say, and getting food to market with an hour less of morning light isn’t easy.

Retail and entertainment industries benefit, since folks have more summer evening daylight to spend hanging out on the town and spending money. No one lobbied harder for the 2007 daylight saving time extension than the candy industry, which would see a full extra hour for Halloween trick-or-treating.

But the idea that we need to change our clocks, rather than our schedules, makes less and less sense in a world where global communication is the norm. There’s no reason we couldn’t adopt summer working hours to take advantage of evening light without moving the little hand forward 360 degrees.

There are proposals to end daylight saving time, of course, but none has the political power or public enthusiasm to get the support it will need to become reality. One idea has the contiguous U.S. divided into two simple time zones, two hours apart, year round. This would be an improvement, but it will never happen. Getting state governments on board is unlikely. And it does nothing to solve the complications of international commerce.

The real solution is both simpler and more radical — conduct all non-local business and communication on Coordinated Universal Time, and international standard that is roughly equivalent to Greenwich Mean Time. We’ll lose some shared meaning — like the concept of a 9-5 job, (we could call it a 8x5 job, perhaps) or the idea that 12:00 and noon are one and the same (noon would shift to become a local notion reflecting the time when the sun is overhead.) But what we’d gain is more significant: a single idea of time, that is unchanging anywhere your feet land, on and even off this planet.

China offers a model of how this would work. That country is nearly as big as the U.S.A. by area, and yet it observes one single time zone. Of course, that doesn’t mean that everyone works the same business day — local areas set their own working hours in accordance with the sun. If you live in Kashgar, near the border with Tajikistan, you’ll always know the time in Shanghai, even if you have to remember to make your business calls early in your day while shops there are open.

Technology makes time changes easier. Most of us use our smartphones both as portable timepiece and alarm clock, and we don’t have to remember to set them forwards or backwards. Our phones wake us up in time for work even when we had no idea that we sprang ahead an hour.

Commercial dealings across borders are also made easier by technology. Online schedules automatically adjust for local time differences and daylight saving time. No one needs to remember how many hours behind Hawaii is, and how that changes depending on the time of year — you simply Google the local time each time you need to make a phone call.

These conveniences make political action to end weird time more difficult. The easier it is to adjust to time differences between and within borders, the harder it is to drum up the public and political will to change the policy.

But technology might equally be our only hope. Silicon Valley is all about efficiency and disruption — few things fall in line with that mission more elegantly that universal time. In fact, computer servers already use Coordinated Universal Time (U.T.C) to synchronize across networks. Folks at SpaceX and Blue Origin must already be familiar with U.T.C — it is the standard for space industry and on the International Space Station. Aviation flight plans, air traffic control, and weather reports also all subscribe to universal time.

A top-down, big government approach to instituting universal time will never work. Stop lobbying Congress, start lobbying Apple. If all smartphones started displaying U.T.C underneath the local time — in small print, as a footnote — it would start to familiarize people with the concept and how it applies to their life. Over time, people would start communicating naturally across borders in universal time, knowing that each can quickly reference it on their phone. As people used it more, it would gain more prominence on clock screens and in imaginations. It would be adopted by fact of its usefulness, not by fact of government decree. This isn’t just a better way to get to universal time — it’s inevitable.