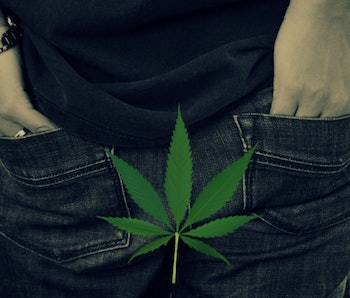 Scientists are continually turning up new medical uses for marijuana, but they’ve yet to come up with a truly safe way to put it in our bodies. Dosage is hard to control in edibles, the potency of weed concentrates is unwieldy, and smoking pot is — like smoking any substance — not great for the lungs. But that’s not the extent of the body’s administration routes, one Canadian scientist is reminding users. The final portal, should we dare explore it, could hold the secret to safely ingesting weed.

University of British Columbia addictions specialist Dr. Paul Farnan is, of course, talking about the butt. Many medically active compounds like laxatives, caffeine, and opioids (Trainspotting, anyone?) have traditionally been administered in suppository form, and Farnan doesn’t see any reason why marijuana should be treated differently.

Certainly, putting weed in the butt avoids running the risk of harming the lungs by inhaling smoke: While research on the adverse effects of smoking weed is still ongoing, a 2014 review of the existing literature in Current Opinion in Pulmonary Medicine concluded that there is “unequivocal evidence that habitual or regular marijuana smoking is not harmless.” The concern seems to have less to do with the substance been smoked and more to do with the act of smoking itself. In an interview with the National Post, Farnan drew a parallel between prescribing marijuana cigarettes and telling patients to smoke an opium pipe. There’s no reason a patient should be taking the risk of smoking when safer, more effective administration methods are readily available, he says.

Why the butt? When the body absorbs compounds into the blood stream, it does so best via its mucus membranes — any of the “wet” tissues in the body, like the mouth, nasal passages, lung, stomach, urethra, and rectum — but they don’t all absorb substances equally. In an interview with the Canadian Press, Mikhail Kogan, medical director of the Center for Integrative Medicine at George Washington University in Washington, D.C., pointed out that the lungs just aren’t very good at this, and neither, for that matter, is the stomach, which is full of gastric acids that interfere with absorption. Smoking or eating marijuana, therefore, simply aren’t efficient ways of administering it. More reasons for doctors to try an alternative route.

There seems to be a lot more control in the dosage of anally absorbed marijuana. “Rectally is actually a lot more preferred because of the volume of absorption,” Kogan said. “You can put a lot more and it gets absorbed a lot better, but not everybody is open to this way of administration.”

Currently, suppositories are made by dissolving cannabis extract in an oil or butter (as anyone who’s cooked their own edibles knows, the cannabinoids are fat-soluble). Putting the finished product in the rectum is said to have rapid systemic effects as well as reduce the drug’s psychoactive effects, which is ideal for people who use marijuana for medical and not recreational reasons. Within the marijuana community, more people are recognizing rectal weed’s potential, thanks in part to the efforts of an organization called Back Door Medicine, which aims to educate the public about the advantages of putting marijuana in the anus. While further tests will be needed to show just how much safer rectal marijuana is compared to weed smoke, anyone curious to experiment on themselves can simply try making their own.

More like this
Science
Sep. 18, 2022
Younger adults aren’t getting boosted — here’s why that could be a huge problem
By Neil Mabbott and The Conversation
Science
Sep. 17, 2022
This household appliance could be filling your home with invisible health hazards
By Jonathan Levy and The Conversation
Innovation
Sep. 21, 2022
Gaming tech could ease pain during surgery — here’s how
By Sofia Quaglia
Related Tags
Share: