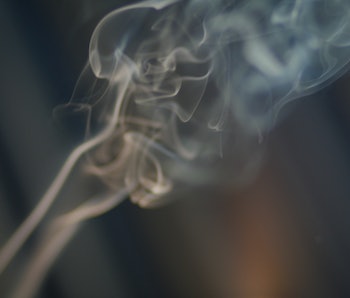 For some, smoking — or attempting to — induces a violent coughing attack, called smoker’s cough.

When a person inhales smoke — marijuana, tobacco, or even secondhand — the carcinogenic compounds build up in the lung’s cilia, the little hair-like structures lining the walls of the lungs. When cilia are irritated, they alert the body to shake it out with some hacking. Coughing, after all, is the most effective way the human body knows how to expel toxins from its lungs.

According to a 2016 study published in the journal Primary Care Respiratory Medicine, which reviewed 19 research articles about the long-term effects of marijuana and tobacco smoking, smoking is bad news for a person’s respiratory system. Most of the studies confirmed that consistent smoke inhalation, no matter the source, can cause cancer, emphysema, chronic bronchitis, and chronic obstructive pulmonary disease, to name a few.

“Inhaling any burnt plant material is not good for your lungs,” Coral Gartner, senior research fellow at The University of Queensland in Australia, told Inverse. “Cannabis smoke also contains some of the same carcinogens that are in tobacco smoke and so it is likely that regular cannabis smoking will increase your risk of developing lung, mouth or throat cancer.”

The first sign that you might be at risk of developing any of these diseases is smoker’s cough. This nasty symptom often occurs in the morning after lungs have had a whole night to build up sputum, which begins to happen when those little cilia hairs get so weighed down that they can’t defend the lungs against regular mucus build-up — and infection. So, when a heavy smoker wakes from their pillow in the morning, all of that sputum comes rushing out in a fit of coughing.

If this doesn’t make you want to drop that blunt now, there are some tricks to prevent smoker’s cough until you do.

In her 2015 paper published by the Society for the Study of Addiction, Gartner explains that with marijuana regulations becoming increasingly lax, people will likely be smoking more of it. So, cleaner methods should be considered.

Gartner suggests that vaporizers may be a cleaner alternative to smoking marijuana. Vaporizers work differently than traditional blunts, bongs, and bowls. They burn the material at a lower temperature, resulting in a less cough-provoking gas or vapor. This is easier on the lungs because it doesn’t require combustion, which means fewer toxins entering the lungs.

“The evidence on the relative harms of vaping cannabis compared to smoking is still developing,” Gartner said. “Vaping is likely to be less harmful as some studies show lower exposures associated risks with vaping than with smoking cannabis and cannabis smokers who switch to vaping report reduction in side effects and improved health. There may be differences in risk depending on the quality of the vaporizer (e.g. the operating temperature). Still, more research is needed on this topic to help cannabis users make informed choices.”

In a 2006 outline from the British Thoracic Society Cough Guideline Group, they discuss how menthol — the primary ingredient in throat lozenges — does a remarkable job soothing a scratchy throat. You could also rub a little on your chest and the “menthol by inhalation suppresses the cough reflex,” she said.

Other common household ingredients that can help soothe the throat are honey, cayenne pepper, and mint.

Another simple way of reducing a nasty cough is sleeping with your head elevated. When your head is lifted at night, mucus from the sinuses doesn’t settle in your airways. This causes build up.

Smoke inhalation dehydrates your body, which exacerbates a chronic cough. By drinking more water, you’ll be counteracting the effects that constant smoking can have on the body. Hydration also helps fight off infection, allowing your body to heal faster. It can also ease a hangover, keep your cells fresh, and make your throat a little less parched. It’s not a complete antidote to smoker’s cough, but plain old water is a first step in that direction.

More like this
Mind and Body
Sep. 25, 2022
Why just one case of polio is cause for alarm — a virologist explains the dreaded disease
By Rosemary Rochford and The Conversation
Science
Sep. 22, 2022
Can science prevent a pandemic?
By Tara Yarlagadda
Mind and Body
Sep. 28, 2022
A new viral cousin of Covid-19 can resist vaccine immunity, study finds
By Miriam Fauzia
Related Tags
Share: