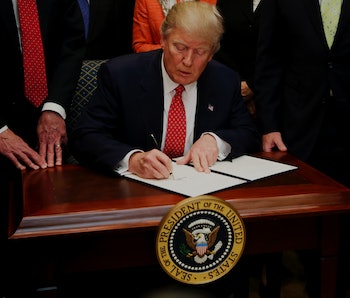 President Donald Trump on Monday signed an executive order barring travel from six Muslim-majority countries in his administration’s second attempt to enact such a policy.

The original travel ban, which fell victim to a hasty rollout, poor planning, unclear scope, and widespread opposition from individuals and corporations alike, suffered a string of judicial defeats — remember “see you in court!”? — before being abandoned.

This new travel ban fulfills many of the same goals as the first and is also set to suspend visas for 90 days, but it doesn’t look exactly the same.

Here are the meaningful differences:

While the old travel ban barred entry to the U.S. from seven Muslim-majority countries — Iraq, Syria, Iran, Libya, Sudan, Somalia, and Yemen — the new one no longer includes Iraq. The administration cited Iraq’s “enhanced screening and reporting measures” as the reason it was left off the list this time. It is perhaps a not-so-subtle way for the administration to demand that the other countries listed take similar steps to heighten security, although their capabilities and willingness to do so may be limited after being singled out by Trump. Intense lobbying from the Iraqi government to have its country taken off the list is also believed to have played a role in the decision.

Legal permanent residents will not be banned.

Among the flaws that plagued Trump’s original executive order was its lack of clarity when it came to the status of legal permanent residents, such as green card or visa holders. Some were detained coming back into the country, while others reported that they now feared leaving, lest they be barred from reentry. Speaking to Fox on Monday morning, Conway stressed that such individuals are not covered by this order. “If you have travel docs, if you actually have a visa, if you are a legal permanent resident, you are not covered under this particular executive action,” she said. The order’s newfound clarity on this issue is sure to come as a relief to the over 12 million green card holders currently living in the country.

The order is not effective immediately.

Another paralyzing issue that affected Trump’s first attempt at a travel ban was his instruction that it take effect immediately. This left law enforcement officials scrambling and resulted in large numbers of people getting stranded in airports as they were suddenly unable to enter the country. These stranded travelers were the focus of the first major protests against the executive order, with thousands flooding airports to demand that people be allowed through the gates. It was a messy situation that took days to resolve. The Trump administration is clearly hoping to avoid a similar mishap this time around, with the executive order taking effect on March 16, ten days after its signing.

The second ban also affects Syrian refugees differently. Instead of being banned indefinitely, as they were in the first iteration, they are now slated to be treated the same as refugees from the other countries named on the list. With the inclusion of Syrian refugees, all refugees will now be subjected to a 120 entry ban, 30 days longer than the ban on visas is set to last. The Trump administration could of course keep extending that ban as long as it wants, rendering this new distinction empty PR. But at least for now it seems to be a slight loosening of the administration’s hardline rhetoric on the matter. It’s an even farther cry from Trump 2015 call for a “total and complete shutdown of Muslims entering the United States.”

Trump signed this new ban in an off-camera event without coverage by the White House press pool, and a later press event, also set to be off-camera, will not include a Q&A.

The degree to which this modified ban will placate critics of his strategy remains to be seen. Opposition to the original executive order was based on more than just the flaws that the administration has since acknowledged. It has largely targeted the idea of a ban itself from both a strategic and moral standpoint. That is unlikely to change. Still, the alterations made to the ban may be enough to see it through the inevitable judicial challenges it will face.